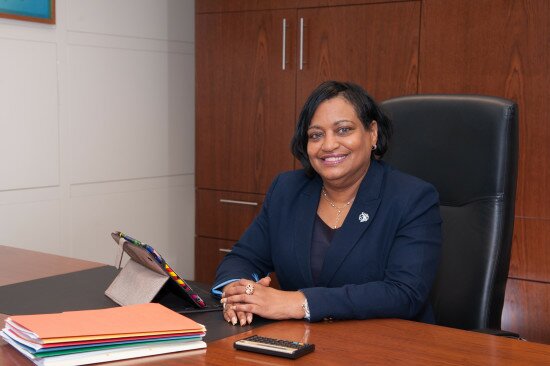 St. Maarten – Starting tomorrow, Regina Labega is no longer authorized to function as the managing director of Princess Juliana International Airport, but it is at this moment uncertain whether she will be removed from her position, her attorney Cor Merx told this newspaper yesterday. “It is unclear what is going to happen on November 13.”

Labega’s position requires a certificate of no objection, but Minister of General Affairs Marcel Gumbs refused to give this to her, based on the result of a screening by the national security service VDSM.

The airport risks a fine of 1,000 up to 500,000 guilders – per violation – if it allows Labega to stay on as managing director. A decision by the Court in First Instance that came down on Tuesday, states however that the ministry will not impose such fines until Labega’s appeal against the findings of the VDSM has run its course.

“If the government does not apply these fines, my client could stay in her position,” Merx said. “In that case she is in breach of the law but there are no consequences.”

On September 18, Minister of General Affairs Marcel Gumbs refused to issue a certificate of no objection, based on the results of a screening by the national security service VDSM. Labega has appealed this decision, but in the meantime she filed a request to suspend this decision until the outcome of the appeal against the screening report. On Tuesday, the Court in First Instance denied the request. This means that starting Friday, November 13, Labega is no longer allowed to function as the airports managing director.

“I decide to refuse you a certificate of no objection because there are insufficient guarantees that you will be able to faithfully complete the obligations that stem from the position of confidence under all circumstances,” Minister Gumbs wrote in the decision of September 18.

The letter refers to the security investigation by the VDSM, but it does not contain further motivation “considering the fact that the VDSM must be able to keep its sources confidential.”

Labega has been the airport’s managing director since July 1, 2011, after she left her position as the director of the Tourist Bureau under a cloud of suspicion. On April 13 of this year the chairman of the supervisory board of the airport’s operating company, Gary Matser, reported Labega to the VDSM for a security screening. The function of managing director at the airport is qualified as a function of confidence, category A.

Two days later, Minister Gumbs confirmed the status of the function and wrote that it requires a certificate of no objection.

On July 14, J. Beeldsnijder, the acting head of VDSM, asked Labega in writing for an extension of four weeks to complete the investigation. Labega answered that she would cooperate if the minister would ask her to do so.

On October 27, after she was confronted with the result of the screening, Labega filed a petition to the administrative court. In it, she asked to suspend the minister’s decision to refuse her a certificate of no objection, but she also demanded the continued payment of her salary from November 13 – the date of her suspension – until the decision on her appeal against the screening report.

The letter of September 18 refers to Labega’s “behavior” and to her “integrity.” During the hearing on November 3, she told the court that she would suffer “significant social damages” from a dismissal or other measures and that, at age 56, it would not be easy for her to find another job.

The attorney for the minister. Aernout Kraaijeveld, noted that the September 18 decision had been “carefully prepared and strongly motivated” while all interests have been considered. “The consequence of the contested decision is that the plaintiff can no longer remain in function per November 13, but not that she will be fired.”

The ministry is not paying Labega’s salary – that is up to her employer.

The court wondered about the interest Labega has in suspending the September 18 decision. “If the contested decision is suspended, the plaintiff still does not have the required certificate of no objection.”

Fear that the ministry will issue fines are not justified, because the ministry said that it would not do that until there is a decision on the appeal.

Labega’s biggest concern, the ruling states, is the protection of her good name that has been negatively affected by the contested decision. “Suspending this decision would be a step in the direction of restoring her good name,” her attorney Cor Merx told the court.

But the court ruled that a suspension would have at best a “relative effect” because “few leads have been presented to expect more than a moderate effect on public opinion.”

The ministry has offered the court the option to review the secret underlying documents – and Labega gave permission for this – but the court considered that not opportune.

The court rejected Labega’s requests. Appeal against this decision is not possible.

Merx said that the attorneys for the ministry had offered dismissal of suspension to his client, but he wondered who was speaking on whose behalf. “Richard Gibson Jr. is the attorney for the country, but he was at the court hearing as the representative of the supervisory board of the airport. His colleague Aernout Kraaijeveld represented the ministry.”

According to Merx, a general shareholders meeting has to decide about Labega’s position. “She has to be properly summoned for such a meeting,” he said, adding that his client has “no problem with the court ruling. The judge was handcuffed by the decision by the Minister of General Affairs who refused to issue the certificate of no objection.”

That the ministry refused to issue this certificate is not surprising. After all, the Public Prosecutor’s Office considers the airport director a suspect in the seriously delayed Tourist Bureau embezzlement investigation.

During the Vesuvius trial in 2013, there were allegations that Labega attempted to give gang leader Omar Jones – a cousin of hers – a false alibi for a shooting at the former Tan Tan supermarket in Dutch Quarter on April 20, 2011. Het attorney Brenda Brooks denied these allegations.

And only last week, the airport, under Labega’s management, donated $10,000 to the Prins Willem Alexander School, where her sister Ana is the principal – but that irregularity falls outside the scope of the screening report.