St. Maarten - The junior queen pageant and Junior calypso and road march competition are the first carnival shows this year. Both events will be held on Sunday March 27 ...

St. Maarten – An early morning fire that kept going well into yesterday afternoon destroyed all vegetation on a hillside overlooking Pinel Island and Orient Bay. The fire started before ...

Repeat of 2007 protest looms over arrival of serenade of the Seas St. Maarten – The United Ministerial Foundation is up in arms about the arrival of Royal Caribbean’s Serenade of ...

St. Maarten - The Safe Haven Foundation received a donation of US $2,500.00 from the “Team Wave” Tuesday. The latter competed in the recent Heineken Regatta and used the opportunity ...

St. Maarten – Workers of the former Pelican Resort said a prayer of thanks in front of the Government Administration Building and thanked their attorneys Maarten Le Poole and Wim ...

St. Maarten / By Donellis Browne – Haitian born singer/songwriter Wyclef Jean has urged Haitians living here to call their family members in their homeland and urge them to vote in ...

Ganja trafficker free due to lengthy stay in police custody

St. Maarten – Junior Wayne Gardiner, a 35-year-old Rastafarian from Jamaica, became a free man again after his trial for importing 1,230 grams of marijuana to St. Maarten on October 2. The Court in First Instance sentenced the defendant to 7 months

Robbing junk, sentenced to another year in prison

St. Maarten – At times it sounded entertaining and almost believable, but in the end Michiel Marcelino Kruythoff, a 51-year-old from Curacao with a serious drug and alcohol addiction who has seen the inside of the courthouse numerous times, had to

St. Maarten – Prime Minister Sarah Wescot-Williams has announced that urgent attention is being given to amongst other things the financial situation at Windward Islands Airways International (WINAIR). She’s tasked Former Aviation Affairs Commiss 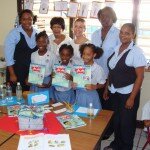 St. Maarten –Iris Kramer, who works in the Dutch Representation in Philipsburg, recently handed over US$ 4, 000 worth of Bright Ideas Science workbooks to the management of the Christian Hillside School. The books were purchased from the Small Pr

St. Maarten – An announcement that Inspector Carlton Phillips and the Public Prosecutors Office have reached an agreement does not single an end to the matter. His former attorney Reynold Groeneveldt, now the country’s Acting Governor, says they

Visiting robber put away for 60 months

St. Maarten – Chad Elvyn Depusoir, a 24-year-old from St. Kitts will have some time to regret his visit to St. Maarten, after the Court in First Instance sentenced him to 60 months imprisonment for his role in an armed robbery at the Cuchara Alegre 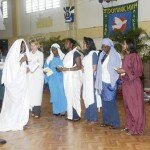 St. Maarten – Tuesday was dubbed the ‘Day of the Catholics.’ On that day students from all the island’s catholic schools met at the L.B Scott Sports Auditorium for activities that are part of a week of Catholic celebrations. The theme is �

Marigot, St. Martin - Leader of the Opposition Party in the Territorial Council Alain Richardson has called for fresh elections in St. Martin. He believes that President of the Collectivity Frantz Gumbs and his faction should resign. He also opined t

THE HAGUE – St. Maarten, Curacao and Aruba have to formulate their vision about the Kingdom’s future sooner rather than later to facilitate a sensible debate about the issue, members of the permanent parliamentarian committees for Kingdom Relatio