MP Sarah Wescot-Williams: “This is a slap in the face of St.Maarten”

St. Maarten – “Nothing Sint Maarten has done with respect to tackling integrity issues has made any difference for Minister Plasterk and his colleagues in the Dutch cabinet,” Democratic Party MP Sarah Wescot-Williams states in a press release,

Road open even though no repairs were done

St. Maarten -Although no repairs were done to the road in St. Peters, representatives of the Vromi department have opened the road. “This road is a traffic hazard and not safe for motorists,” said Koto Wilson, who has been a fire man for over 14

Three in custody for Atlantis robbery

St. Maarten - Three persons are currently in police custody for their involvement in the Atlantis Casino robbery which took place on November 16th 2014. The Detective Department reported yesterday that there is a lot of progress in the investigat

St. Maarten -“Nice talk, passed some motions and many questions during the 2015 budget debate like all previous budget debates and then the entire government including parliament go into an induced coma,” says leader of the One St. Maarten Peopl

A marriage of science and nature: Using the mind to change the brain

St. Maarten — In a blissful marriage of science and nature, the Global Health Clinic in Pointe Blanche is pioneering the way forward for others in their field. Cutting edge technology is used by a team of doctors to pinpoint the exact areas in the

Not everything is well in Oyster Pond. The Oyster Bay Beach Resort seems to be acting like the big bad wolf, by claiming a part of the beach in front of the Great House next to Busby’s Beach Bar for the placement of beach chairs for its guests.

The ghost of a murdered leading politician haunts Curacao; emotions are upstaging intellect, Jacob Gelt Dekker writes in his column on Curacao Chronicle. “Last week, the Curacao Court of Appeals heard the case of the Helmin Wiels assassination a

For nearly a decade, Paul Miller has been working with the St. Maarten Heineken Regatta, advising the race committee on such matters as managing the entries, class divisions and publishing results through his company regattaguru.com. With One-Design

St. Maarten – Judge Maria Paulides will rule on a dispute about the beach in Oyster Pond that has been dragging on for years. The parties involved are Low Road to Heaven (Busby’s beach Bar), Laissez-Faire (The Great House) and Pearl Development

St. Maarten – In its plan of approach for the execution of the recommendations made in the three integrity reports that were published last year, the government has made the establishment of the independent Integrity Chamber its number one priorit

Grounded private jet goes back to the United States

St. Maarten – The private jet law enforcement confiscated in March of last year and that has been grounded at the Princess Juliana International Airport ever since, will not be sold by the local prosecutor’s office. Prosecutor Tineke Kamps tol

St. Maarten - If February is about the celebration of history, then Anguillian writers are about to make a splash with the upcoming poetry book that includes the works of Bankie Banx, the island’s legendary singer, said Jacqueline Sample, preside

“The guy is a con artist”: Wathey II dismisses claims made by Ramcharan

St. Maarten – Norman Chester Wathey II has dismissed claims announced by Rotterdam-based Mahinderkoemar Ramcharan. The latter claimed in an email he sent last week to this newspaper’s website that Wathey still owes him €50,000 plus 20 percent

St. Maarten — A number of residents in the Cul de Sac area received free health care from the Mobile Health Bus on January 28th when the bus visited that district from 4pm to 7pm to attend to persons who wanted a free health/medical check-up. The

St. Maarten –The first-ever Kooyman Home Improvement Fair, is carded for February 28, from 8:00am -6:00pm at the Kooyman Megastore St. Maarten. Exhibitors of this home improvement fair will showcase new and innovative trends and products in home r

St. Maarten – A presentation about St. Maarten’s hub function and Government’s incentives to attract business to the country, was given last Thursday by Minister Plenipotentiary Josianne Fleming-Artsen at the Dutch Caribbean Business Club even

Prime Minister Gumbs and Justice Minister Richardson did not use the word but if one thing is clear it is this: St. Maarten and the Netherlands are at war. Never before was it so abundantly obvious that the kingdom is in dire need of a dispute regula

Dear Editor, It is with much genuine sadness that we inform you and all of our St. Maarten friends that our final trip to the island will take place in a few short months, only because our air travel had been paid for prior to receiving a poorly-w

Kingdom Relations Minister Ronald Plasterk apparently has the Kingdom Council of Ministers in his pocket. Otherwise it is tough to explain why the council went so happily along with the idea to threaten St. Maarten with another instruction. Well,

Anger over Ronald Plasterk’s looming instruction: “No room for consensus”

St. Maarten —A number of the islands primary schools were recently the recipients of traffic stop signs and vests donated by the St. Maarten Lions The Lions Club said yesterday that they have recognized the need to improve the safety of childre

St. Maarten – Social insurance Bureau SZV lost an administrative lawsuit that focuses on the right to sick-benefits that warrants wider attention. SZV wanted to terminate the sickness benefit for a 30-year-old man who suffers from sickle cell dise

St. Maarten - More intensive controls at businesses will begin soon by the Multidisciplinary Control Team which consist of members of the Inspection and Control departments of Government such as; the Immigration and Border Protection Services, the L

St. Maarten - At least 100 entrepreneurs and 20 vendors are expected to participate in what is being billed by organizers as the new and improved Power Hour On March 4, 2014, Power Hour is a Networking event for “Movers & Shakers” and has af

The St. Maarten Carnival Development Foundation (SCDF) will dedicate Carnival 2015 to three “giants of Carnival” across different facets of Carnival. The foundation will continue a practice started three-years ago by dedicating every Carnival yea

St. Maarten -The Board of the Windward Islands Teachers Union (WITU) is planning a general membership meeting to discuss a number of issues such as the salary scales structure and some other deductions that the school boards are demanding from the t

St. Maarten -With all the excitement and the hype surrounding the outcome of the 63rd Miss Universe Pageant fading by the second, its time to focus on the highly anticipated crowning of the Miss West Indies that will take place on Valentine’s

St. Maarten -There was never a dull moment under the tent at the Princess Port de Plaisance last Friday when Andrea Wright, stage name Delcita Coldwater and her star studded cast appeared in the theatrical play, ‘Elsayda.’ The play which was

That the government’s telecommunication bill is getting completely out of control cannot be a surprise to anyone. Phone bills are sky high for the same reason it is always so cold in government offices: civil servants do as they please because they

In the picture, students of the Sr. Marie Laurence, Sr. Regina, Sr. Borgia and Charles L. Bell Schools along with the students from the Hillside Christian schools together proudly pose with their new signs and vests, along-side members of the St.

St. Maarten – Members of Parliament submitted five motions and one budget amendment during yesterday’s debate about the draft 2015 budget that is on paper balanced at 445 million guilders. At press time, the deliberations were still ongoing, tho 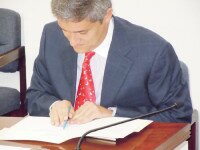 St. Maarten – The government has an outstanding bill with telecom provider TelEm for 15 million guilders, Minister of General Affairs Marcel Gumbs told the parliament on Wednesday evening late during the budget debate. In 2014 alone, the total bil