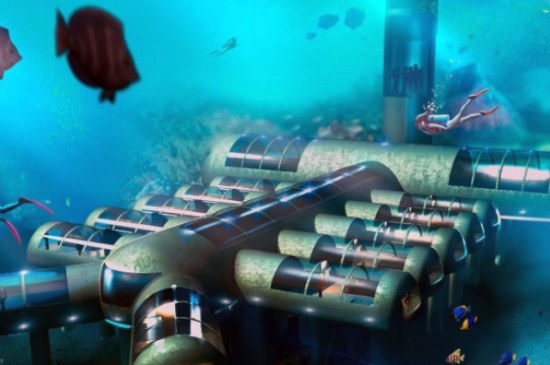 The Ministry of Tourism, Economic Affairs, Transport and Telecommunication is looking into reports about the Planet Ocean Underwater Hotel a project by Tony Webb, who recently sponsored the Synergy Moon project, an official entrant in the Google Lunar X Prize. Webb has invited Caribbean island nations to express their interest in hosting the hotel.

According to a report on iflscience.com, Webb has approached all Caribbean island nations to gauge their interest in giving the project a home.

The web site reported that the hotel would be anchored 8.5 meters – or 28 feet – below the surface. The Planet Ocean Underwater Hotel recently received patent and trademark approval, the site reported. The hotel is set to be constructed in Key West in Florida and then it will be shipped to its destination – and that could be St. Maarten.

Access to the structure will be via an elevator, with all rooms boasting Wi-Fi, air conditioning, and panoramic vistas of the surrounding marine environment. Even more extraordinary is the fact that the hotel is technically classed as a vessel, since it is able to navigate the ocean using electromechanical propulsion, allowing it to change location in order to avoid storms.

Tony Webb is in the race to place a robot on the moon with his synergy Moon project, but the underwater hotel has now switched his attention from outer space to inner space tourism. The hotel will offer “adventurous travelers the opportunity to explore the depths of the world’s oceans.

The construction costs are estimated at $20 million but the hotel is designed to do more than just offer unique travel experiences. “It is part of a larger philanthropic project to restore coral reefs around the world,” iflscience.com reports. “Recent reports have suggested that climate change has resulted in a rise in submarine temperatures, causing widespread bleaching of coral reefs, with around 38 percent expected to be affected by the end of the year.”

To help address this problem, the team behind the hotel are funding a global coral reef restoration program, using a technique known as the Biorock process. This involves passing an electric current through seawater, which causes minerals in the water to crystallize, forming white limestone (calcium carbonate) structures. Corals are then able to adhere to these and flourish. The technique is currently in operation at various locations across the globe, including places like Jamaica, Palau, Thailand and Mexico.

Countries have been invited to register their interest in hosting the Planet Ocean Underwater Hotel, including every Caribbean island nation. As long as these countries approve a mooring location for the structure, they will be able to temporarily host the hotel until it moves on to its next home, iflscience.com stated.