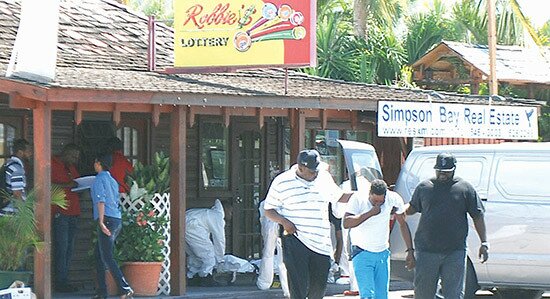 Police escorting the brother of the victim off the scene yesterday morning. The coroner staff is seen in the back loading the body of the man in the van. Photo Today / Andrew Dick.

St. Maarten —The police is investigating another shooting incident where a man has been shot several times in the vicinity of Robbie’s Lottery in Simpson Bay at about 9 a.m. on Sunday morning. Known to the neighborhood as “Nemo” the Dominican national was shot in the stomach by an unknown assailant. According to the police spokesman Chief Inspector Ricardo Henson “the Central Dispatch of the Police Force received a call of the shooting where a man lay dead in front of the Robby’s Lottery office at the Palapa center.”

We do not know for sure what happened but we believe the car in front of the establishment is the vehicle belonging to the victim. We believe that he was a Spanish speaking person but his identity has not been confirmed as yet,” Henson said.

The victim was shot at least four times. “We are still investigating the incident with the Forensic Department who are on the scene, who are trying to locate as many witnesses as possible,” Henson said. “We do not know who did the shooting, who the victim or the perpetrator was. We have some information of some things that have happened that cannot be revealed at this time.”