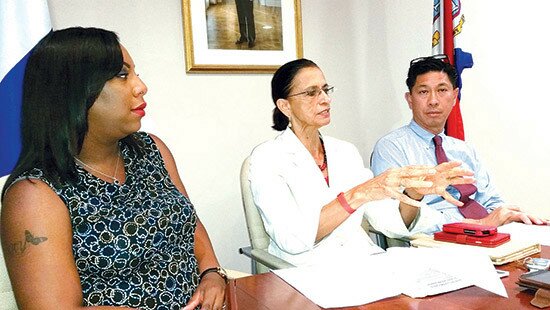 St. Maarten – In case Governor Holiday decides to sign the decree to dissolve parliament and elections follow on December 8, the Democratic Party proposes to annul the current motion, to let the new majority choose “a capable Council of Ministers” and to set the date for the elections one year from the appointment of this council. At the same time, the parliament should be mandated to complete electoral reforms within that year. These reforms should then take effect during the elections. Impartial inspectors should monitor these elections “to maintain integrity,” the DP said at a press conference yesterday afternoon.

DP-MP Sarah Wescot-Williams said that she agrees with the governor’s press release in which he says that nothing stands in the way of forming a new government based on the new majority in parliament.

“The DP believes that it would benefit from snap elections, but it also believes that without electoral reform new elections will not solve any of the fundamental issues that handicap parliament’s performance.”

Wescot-Williams acknowledged that she received a phone call the day after the vote of no confidence from somebody who attempted to bring her party over to the other side. The MP declined to provide details about the conversation or about the identity of the caller and let it suffice that she supports the new majority.

The DP has campaigned for transparency, accountability and integrity and it considers this its core principles. Yet the party finds itself now in a coalition with MP Silvio Matser who has a criminal conviction for fiscal fraud to his name.

Asked what she feels about this aspect, Wescot-Williams said that Matser is “one of the fifteen seats in parliament.”

Her policy advisor – and possibly the next minister of Public Health Social Development and Labor – Emil Lee added, “The DP subscribes to a core set of principles. If other members of parliament join and support that vision then they are welcome, whatever their background. The DP is not changing its philosophy about transparency and open government.”

Wescot-Williams said that she welcomes the discussions that are currently underway about the constitutional situation. “From the moment the rumblings started the DP was concerned,” she said. “We had two choices: take a backseat or join one of the sides. The changes we are looking for are not coming tomorrow. There has to be electoral reform,”

The decision to dissolve parliament is “null and void,” Wescot-Williams said. “Their argument is about stability. How will you get that with new elections? A week after the next government takes office nothing prevents this from happening again. We need more rigid rules for ourselves.”

Wescot-Williams referred to the proposals she made for electoral reform when she was prime minister. They include changes to the electoral ordinance, the ordinance on party registration and financing and the rules of order of parliament.

Did you like this? Share it:
Tweet
In case governor signs decree to dissolve parliament: DP proposes interim cabinet and elections after one year by admin