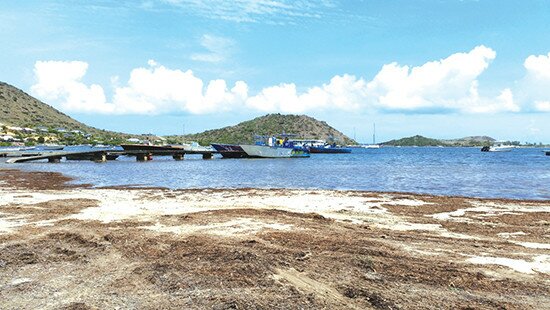 There is still Sargassum seaweed left on the parking lot in Cul-de-Sac and the place still stinks to high heaven. Photo Today / Hilbert Haar

CUL-DE-SAC – The green brigade deployed by the Collectivité d’Outremer de Saint Martin has attacked the Sargassum seaweed problem in French-side Cul-de-Sac last week with gusto and the team made some serious progress. However, yesterday there was still seaweed on the parking lot near the spot where the little ferry boats depart for Pinel Island and the stench was still unbearable.

Near this location are not only private homes, but also an elementary school. A bit further away is a secondary school.

The green Brigade members wore boots, masks and gloves during their work that began last week Thursday. They had to fight a 70 centimeter thick carpet of Sargassum seaweed that stretched over a length of ninety meters.

The regional health authority ARS has measured the emission of 7.3 ppm (parts per million) of the toxic hydrogen sulfide in the sector of the embarcadero. According to the ARS, people should wear a mask when the emission exceeds 5 ppm and they should evacuate an area where it exceeds 10 ppm.

According to the French side newspaper St. Martin’s Week emission at a distance of 10 meters from the seaweed stood at 7.3 ppm, at the nearby homes at 5.2 ppm.

While the stench in Cul-de-Sac penetrates everything, there are nevertheless residents facing the embarcadero who keep they windows open.

That the French side takes the Sargassum crisis serious appears from the fact that it has made €200,000 available to combat the seaweed. The French state finances 90 percent of the costs of the Green Brigade; the environmental agency Ademe pays the remaining 10 percent.

The recovered Sargassum has been taken to a piece of land in Orient Bay for drying. Afterwards the material will be turned into compost.