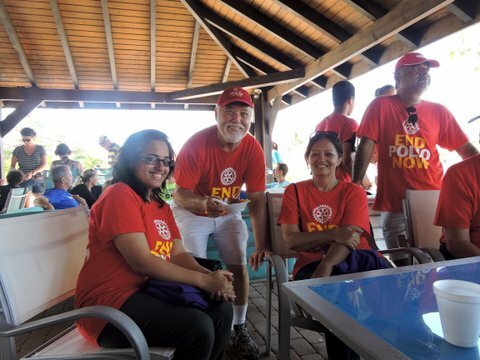 St. Maarten – Rotary Club of St. Maarten-Mid Isle hosts it second annual End Polio Now walkathon next week Saturday. Rotary President Ramesh Manek started the walkathon last year. He died last year on April 16 in a fatal hit and run on the Airport Road. This year, the walkathon is held to honor Manek’s memory and the contributions he made.

Over the weekend Rotary Club of St. Maarten-Mid Isle participated in the Tropical Shipping Duathlon to create awareness for the End Polio Now cause. Peter Mazereeuw, Matthijs Mazereeuw and Veronica Jansen-Webster took part in the 5k run, cycling, and 2.5k run respectively.

Members of Rotary Club of St. Maarten-Mid Isle as well as family and friends, including the family of Ramesh Manek supported the team.

Tickets for the walkathon are $15; they include an End Polio Now shirt and breakfast, and can be had from any Mid Isle Rotarian. Call 520 49 45 to have your tickets delivered.

Rotary has dedicated resources and energy toward the eradication of polio worldwide since 1978. Recently Nigeria has been deemed polio free leaving only two more endemic countries in the world, Pakistan and Afghanistan. The rotary district has contributed significantly towards this international project through efforts led by Ramesh Manek who encouraged all clubs in the Caribbean and America to contribute. His efforts did not go unnoticed as the district named the polio collection posthumously after him. The district governor also gave him an award.