St. Maarten - The Leeward Islands one-day cricket tournament that has enjoyed premier sponsorship from National General Insurance Company for the a few years now will be making a return to St.Maarten in October. This year’s Nagico Insurance Leewar

St. Maarten - After a display of team work and dexterity the Captain Morgan team secured enough points to be crowned as the championship team in the 2012 All Female Sports day event which was held at the Omni Sports Auditorium in Galisbay on Sunday.

St. Maarten - When the “St. Maarten national selection” female volleyball team plays in St Kitts this weekend, the United Volleyball Club (UVC) will be rooting extra hard. The majority of the territory’s players in the Eastern Caribbean Volley

Athletes return from France with gold and silver medals

Richardson promises to invest more President of the Collectivité Alain Richardson (second left) poses with the Speedy Plus delegation after they arrived at the Grand Case Airport.GRAND CASE, St. Martin - Several athletes who represented St. M

St. Maarten - After weeks of intense competition, the weaker teams have been eliminated from the school soccer competition, some are still fighting to remain in contention and the battles among the stronger teams have intensified. In one of the q

Athletes warm up for Boardwalk Triathlon

St. Maarten - Without even knowing exactly who the visiting opponents are, some of the local athletes have been getting in shape to compete in the Boardwalk Triathlon next Sunday. Early yesterday morning, several men and a few women that will be

SIMPSON BAY – The St. Maarten Yacht Club reports that the competition for its 11th annual Marlow One-Design Regatta is already getting fierce. Although the contest is slated for June 16 and June 17, many local and regional teams appear in top form

St. Maarten - As several countries around the world celebrated mother’s day, the St Maarten softball Association has made the day a very special one for a few ladies that have contributed in one way or the other to the development of the game on th

St. Maarten - In the 2012 Softball season which is in its third week, the ladies in the Steelers team have displayed that they can be as determined as their male counterparts when they defeated the Survivors by 34 to 0, when the competition resumed l

Sports: Nickey: “We have to restrict abuse of field”

St. Maarten - The re-introduction of ladies football, the staging of a Leeward Islands tournament and participation in Digicel Cup are just some of the topics on the agenda of the St Maarten Soccer Association (SMSA) for 2012 as they embark on a new

St. Maarten - The Windward Islands Bank softball team will be going into the 2012 season which began Sunday with a psychological advantage after securing three of the six awards in the male category for their performances in 2011. In addition to t

Sports: St. Martin/St. Maarten to compete as one

St. Maarten - Some of the seasoned athletes from both sides of the island will be facing a stern test when the Speedy Plus club stages its first international track & field events at the Alberic Richards stadium in Sandy Ground from May 5 to May 9. T

St. Maarten - There’s more than one way to enjoy the legendary “Serious Fun” that’s become the trademark for the annual St. Maarten Heineken Regatta, the 32nd edition of which is scheduled for March 1 to March 4. Thanks to a website that li

Michel Hunte (center) beats the field in the battle of the ladies down the 60meter track.St. Maarten - The male athletes from the Dynamics Track Club were forced to compete against themselves due to the absence of competition from their French co

St. Maarten - The collective efforts by 39 swimmers in various age brackets resulted in 120.25km recorded when the Carib Swim Team staged their annual six hour Swim A Thon at the pool in Cole Bay on Sunday. The objective of the event each year is

St. Maarten - Walwin Francisco and Dave Lake won the two first cycle races of the year on Sunday. The 15 lap event, which was organized by the Soualiga Cycling Club, had 23 participants who began their circumnavigation of the Great Salt Pond at the F

St. Maarten - The Soualiga Cycling Club presented the proceeds from Sunday’s season opening race to Emmanuel Laud yesterday to show their solidarity with Deion Richardson – a cyclist who was shot under mysterious circumstances on November 5 in An

St. Maarten - After a premature end to the RBTT 50 over cricket tournament last December, the battle is set to resume next weekend with the A&A Supply Events taking on KFC Twisters on Saturday and Future Champs versus MNO Montego Bay the followin

Cricket coach Singh calls on youngsters to get involved

St. Maarten - With the emphasis on developing the game of cricket at the grass roots level, National Cricket Coach Rishi Parsram Singh is once again extending an open invitation to young boys that are willing to get involved with the sport. Singh,

St. Maarten - Dynamics Track Club has decided to use the cricket field in Cul de Sac because they can no longer access the Raoul Illidge Sports Complex so they can stay in mental and physical shape. The athletes are in a race for space at the new ven

St. Maarten - Antonio Feliz, a pony league baseball player, has received a baseball scholarship to attend a college in the United States of America. Feliz, who is a short stop, is one of the St. Martin players that was recently selected for the Frenc

St. Maarten - Sixteen year old Dutch sailor Laura Dekker will end her around the world sailing trip here sometime between January 20 and 26. More accurate predictions are expected once Dekker passes the doldrums (an area with no or light wind conditi 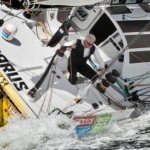 Antilope returns to St. Maarten St. Maarten - Organizers of the St. Maarten Heineken Regatta announced on Tuesday that Brad Van Liew has entered his Open 60, Le Pingouin, into the 2012 event which takes place March 1 to 4. The organizers will al

Youth display sportsmanship at Rights of the child Sports Day

St. Maarten - After dropping two points from a draw, the Strikers and the RISC Takers who lost their first game to the Paradise INN yesterday are now locked in a battle of their own with only three weeks to go before the grand finale in the tournamen

GREAT BAY- After scoring a total of 109 runs and capturing three wickets and two catches, Junior Mitchum, the Captain of the St Kitts team emerged as the MVP when his team defeated Nevis by 31 runs yesterday. Four teams participated in the second an

St. Maarten - The first race of the 2011-2012 sailing season keelboat races series will be sailed on Sunday in the coastal waters November 20 between Maho and Great Bay, with the starts in Simpson Bay. Last season’s winner in the racing class “Co

GREAT BAY- St. Maarten Warriors’ inability to shoot from outside the zone haunted them especially in the dying stages of a decisive match against Martinique on Sunday. The visitors won the match 59 – 45. The Warrior’s defeat puts them in seco

FIFA Development Officer and CFU candidate Harold Taylor is flanked by SSA President Owen Nickey and VP Elton Jones during a brief meeting which was held at Déjà vu last Saturday.  “A vote from St Maarten is as good as Jamaica or Trinidad

St. Maarten - The Coco Cola Steelers hoisted the Windward Islands Bank trophy by defeating the Diamonds 11-5 over the weekend. The victory makes them the undisputed softball champions. The Steelers started the tournament on a high note last Friday

St. Maarten - American long distance runner Greg Decker and a former 400/800 meter runner from Jamaica Omarco Robinson kept St Maarten’s flag flying high when they finished in the 2nd and 3rd spot in the 28th edition of the Fatum Loop in Curacao on