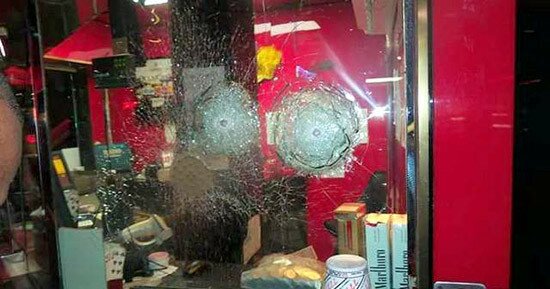 St. Maarten – Close to 9 p.m. Wednesday evening, a lone gunman stormed into Rouge et Noir casino on Front Street and shouted “everybody down” while waving his firearm to the crowd. Masked and dressed completely in black the robber fired his weapon in the air to show that he meant business.

Patrons were enjoying their Wednesday night bingo, when the robber ordered them to get on the ground. This caused wide range panic in the casino. Employees traumatized by the act followed instructions from the robber to let him into the cashier area which was covered by a bullet proof window. The robber discharged his pistol twice during the robbery. In less than 10 minutes the assailant filled his bag with big bills and ran from the scene.

The casino management declined to say how much money was taken but according to one of the staff members more than $50,000 was taken from the safe in the cashier’s cage. Police arrived on the scene minutes after the incident and started their investigation.

Police spokesman chief Inspector Ricardo Henson said that the suspect robbed the establishment of an unknown amount of cash and fled the scene on foot. The Forensic Department collected evidence while the detectives questioned witnesses. This case is under investigation by the Special Robbery Unit. The public is encouraged to come forward if they have any additional information that can lead to the robber’s arrest.

The police are concerned about the recent hike in robberies and advises the residents to pay attention to their surrounding and safe guard their valuables.