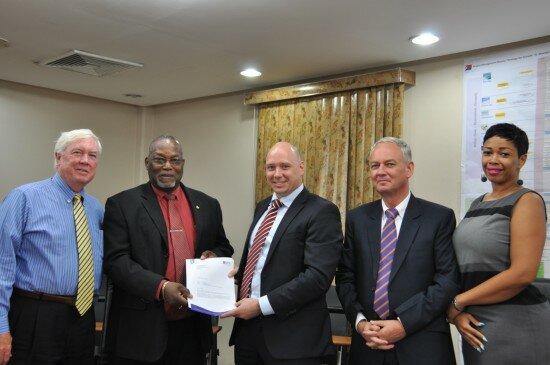 The sea water intake installation supplies sea water, taken from the open sea at the end of the cargo cay, as feed water to the reverse osmosis water plant at Pointe Blanche. The full installation consists of a number of secured intake lines, a hurricane withstanding concrete pump house that includes a transformer station, electrical switching and control panels in separate rooms and outside the properly covered and protected underground polyethylene water line with the high voltage Gebe cables laid next to the line in the same (deep)trench.

The seawater intake became necessary as an additional investment when the original plan to have feed water wells drilled was not a feasible option as the tests wells showed that sea water is available but not to the volume required to adequately feed and operate the two reverse osmosis units of Pointe Blanche. The financing of the additional investment was provided by Seven Seas Water and the intake facility was built simultaneously with the construction of the first reverse osmosis production unit. Both installations were taken into service in March 2014.

Government and Seven Seas Water agreed to have an independent auditor establish the actual cost of the facilities. These will be added to the amount to be paid for taking over the ownership of the production plant in Pointe Blanche at the end of the water supply agreement with Seven Seas in 2022.

The audit report from the independent auditor Soab, after having executed an audit based on an approved benchmark, confirms the correctness of the cost of construction of $1.8 million. With the reduction for the well installations of $0.5 million the total amount to be added to the buy out amount is $1.3 million.

Minister Boasman thanked Soab auditor Lieuwe Hiemstra for a job well done and expressed his appreciation to Seven Seas Water for the quality of the reverse osmosis plant installations at Pointe Blanche including the sea water intake and the reliable daily production of quality drinking water.

The Minister is looking forward to the completion of the second modular reverse osmosis unit in Pointe Blanche which is scheduled for completion in February 2016.