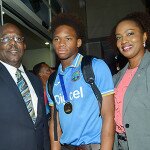 St. Maarten News - After arriving on the ATR-72, to the special reception in the VIP Hall at the Princess Juliana International Airport followed by a tremendous greeting in the arrival hall and finally driven away in an Audi A8 in a mini motorcade ha

Christel H. runs the parasail company on the boardwalk. Photo website NO1SXM parasailing St. Maarten News – Local Company NO1SXM Parasailing, established on the Boardwalk in Philipsburg, is at the heart of a large scale investigation i

One of the firearms police found in the car. Photo KPSM St. Maarten  – Police arrested four men for drugs and firearm possession yesterday around noon on the Union Road close to the French border. The multidisciplinary team caught the men –a

The Treasure Seeker when it was still in good shape. Photo flickr.com St. Maarten News – A local marina demands more than $1 million in damages from the owners of the Treasure Seeker, a pseudo pirate ship that crashed during Hurric

St. Maarten News – Kathron Fortune, the convicted killer who escaped his prison guards in Cay Hill on Monday afternoon, is still at large, the police said in a press statement. “An intense search to recapture this prisoner is still ongoing.”

Virologist Byron Martina. Photo Caribisch Netwerk / Pieter Hofmann THE HAGUE – Aruba, Bonaire and Curacao are on the eve of a Zika-epidemic. That is the expectation of Byron Martina, a virologist at the Erasmus Medical Center in Rotter 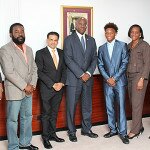 Dear Editor, You've got to give honor to whom honor is due. The Honorable Minister Emil Lee stepped out from the comfort zones of his air conditioned office and upscale neighborhoods and visited one of the homes in Middle Region that has been expe

St. Maarten Airport News - The partnership between the Human Resources Department of Princess Juliana International Airport with the University of St. Martin’s School of Continuing Education & Life-Long Learning (Scell) for an employee trainin

Police confiscated marijuana and a knuckle duster. Photo KPSM St. Maarten News – Police arrested a 16-year- old student on L.B. Scott road yesterday around noon, after receiving a phone call saying that he was smoking drugs with so

St. Maarten News - The St. Maarten Marine Trades Association (SMMTA) has officially announced that they are looking into the opportunity to once again host a St. Maarten Boat Show.  The announcement was part of a presentation given by the board of

St. Maarten News - The Managing Director of the Windward Islands Bank Derrick Downes has confirmed that the speedy deposit boxes at all branches have been closed. Among the reasons cited were transparency and security reasons even though there ar

Come Center is its brother’s keeper

Needle work requires some concentration. Photo Today / Andrew Bishop St. Maarten News  – “The Community Outreach Mentorship and Empowerment Center has been helping seniors in their quest to become more productive in the communi

St. Maarten News - The Ministry of Public Health, Social Development and Labor (VSA) signed off on a collaboration agreement with the American University of the Caribbean, School of Medicine (AUC) last week Thursday. Although the Ministry has been co

Bikers over 50 power sales in the Netherlands

THE HAGUE - Sales of new motorcycles in the Netherlands rose for the second consecutive year in 2015, according to Central Bureau for statistics CBS. In total, 11,000 new motorcycles were sold last year, a 10 percent increase on 2014 sales. Demand fo