Timeshare, the sick cousin of the tourism industry

After many years, legislation remains in limbo St. Maarten - Trouble in the timeshare industry probably dates back further than December 2010, when the controversial sale of the Pelican Resort caused uproar among employees and timeshare

Comments Off on Jakisha Brooks on student athlete visit in Miami

MIAMI/ ST. MAARTEN - Jakisha Brooks is ending the year on a high note. The 18-year old 5’ 11” starting forward for the Learning Unlimited team in the Ladies Basketball Championship is on an official NAIA (National Association of Intercollegiate

Comments Off on Port St. Maarten denies plans to build  parking lot on the beach

GREAT BAY - Port St. Maarten Management Hhas refuted allegations that it plans to build a parking lot on the public beach near the Walter Plantz Square. “The beaches are part and parcel of the stay-over/cruise tourism experience, and it

Comments Off on Intruder stabs woman in her home and flees

Intruder stabs woman in her home and flees

St. Maarten – An intruder stabbed a woman in her home on Back Street yesterday morning around 6 a.m. The victim was treated on the spot by paramedics and taken to the St. Maarten Medical center for treatment where she remains in stable condition.

Long lines at Gebe after employees call in sick

Raymond Jessurun: “Time for a policy to compensate consumers” St. Maarten – Utilities Company Gebe and telecom provider TelEm were not exactly doing a favor to their clients who came in to pay their bills. Windows to service senio

St. Maarten - With robberies having become more frequent on St. Maarten, the Law Enforcement Council has investigated the approach used by law enforcement to curb the number of these crime incidents. With this in mind, the council has ma

GREAT BAY - The St. Maarten Lions Club delivered food and drinks to 25 underprivileged families in just over a two hour period on Christmas Day. As part of the 2014-2015 year program, the club delivered a hot meal which was catered by Bree�

Comments Off on “Numerous reports” about ill-treatment during Xmas

“Numerous reports” about ill-treatment during Xmas

St. Maarten – It must have been quite a Christmas Holiday weekend, given the fact that the police received “numerous reports about ill-treatment and threats.” The police report mentions however just two examples. One incident took place on B

Comments Off on Weekend with many car accidents

Weekend with many car accidents

Sint Maarten – The police is currently investigating more than twenty-five reported traffic accidents that took place during the Christmas holiday weekend. Ten of these accidents were with personal injuries. In many cases, the drivers were not pay

St. Maarten - A recent report, presented to St. Maarten’s Minister of Justice by Franklyn Richards, member of the Law Enforcement Council, contains the findings of a second follow-up study conducted by the Council, regarding the juvenile probation

Institute wants action against all you can drink parties

AMSTERDAM - Local authorities should play a more prominent role in efforts to stop teenagers drinking so much alcohol, according to the Stap institute, which promotes responsible drinking. In particular, Stap says it is concerned about ‘a

Comments Off on Open government

Our government wishes to be open and transparent. We have seen some examples of this given by Public Health Minister Emil Lee and only last week, Education Minister Silveria Jacobs confirmed that she is on the same page – actually, that the whole g

“We’re in a sea of competitors and many of them are sharks” St. Maarten - Chief Executive Officer Mark Mingo recently signed an agreement with Ernst & Young Advisory Services, to perform an enterprise risk assessment, which

St. Maarten / By Hilbert Haar – “I think that not all the facts were presented to him,” former Prime Minister Marcel Gumbs told this newspaper yesterday in a reaction to the interview with Dr. Rutsel Martha. “He is a good friend a

Comments Off on Plasterk steers clear of St. Maarten’s elections

St. Maarten - Minister Ronald Plasterk (Kingdom Relations) has informed the Second chamber that the elections in St. Maarten are not a matter for the kingdom government. In a letter to the Dutch parliament – a reaction to a request for an update on

Investigators ask witnesses of the Gumbs-murder to come forward

St. Maarten – The Public Prosecutor’s Office and the police appeal to witnesses of the Roberto Gumbs murder to come forward and share their information with investigators. Gumbs was killed on November 24 in front of the K.A.R.E. Gumbs supermar

Comments Off on “Governor Holiday made Gumbs look like a fool”

Dr. Rutsel Martha: revoking dissolution decree perfectly legal By Hilbert Haar - LONDON / GREAT BAY - The decision by the Marlin-cabinet to withdraw the October 29 dissolution decree and to replace it by another one that pushed the elect

Drivers of one in three buses violate permit conditions

No insurance, no driver’s license ….. St. Maarten – The Inspectorate of the ministry of Tourism, Economic Affairs, Transport and Telecommunication found during controls last week Thursday and Friday that the drivers of 16 out of 46

Comments Off on New parties: enough time for electoral reform

St. Maarten – The Maho Group recognized its outstanding and dedicated team members as Stars of the Hospitality and Tourism Industry this week at Sonesta Resorts’ End of the Year Team Appreciation evening. The resort group singled out a number

Comments Off on Smoke detectors become mandatory on French side

MARIGOT – All dwellings on the French side must be equipped with a smoke detector by June 30 of next year, the French-side newspaper St. Martin’s Week reports. The Territorial Council took the decision to make this mandatory, based on a French la

Government about to collect 13 million from casino sector

Parliamentarians happy with withdrawal increased road tax St. Maarten – By providing the receiver’s office with a mandate, the government is able to collect 13 million in tax arrears from the casino-sector, Finance Minister Richard Gibson said 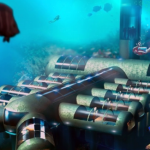 Impression of the underwater hotel Tony Webb intends to construct in Key West. Photo iflscience.com The Ministry of Tourism, Economic Affairs, Transport and Telecommunication is looking into reports about the Planet Ocean Underwater Hote 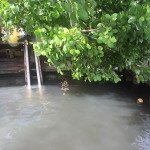 The place were raw sewage went into the Simpson Bay Lagoon. Photo courtesy Nature Foundation GREAT BAY- The St. Maarten Nature Foundation responded to a recent incident of constant pumping of sewage from the vicinity of Paradise Plaza in

Comments Off on Living Statues Festival kicks off tonight

St. Maarten – Tonight from 7 to 9 p.m. the Living Statues Festival kicks off in the St. Rose Arcade on Front Street, organized by the Beyond Kultura Events Foundation in partnership with Arlene Halley of the National Institute of the Arts and the W 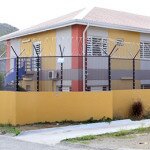 Comments Off on Detective sentenced for domestic violence

Comments Off on St. Maarten Housing Foundation has to pay former controller

St. Maarten – The Court in First Instance ruled that the St. Maarten Housing Foundation (SMHDF) has to pay its former financial controller Emilio Kalmera his full salary and vacation allowance over the period April 1 – July 1 - an amount of appro 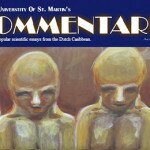 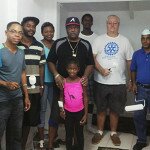 Rotarians (including David Antrobus, third from right) and members of the table tennis federation. Photo contributed. The Rotary Club of Sint Maarten-Mid Isle recently helped with the repairs and cleanup of the St. Maarten Table Tennis F

Comments Off on Daniel Gibbs about a painful year: “Put true meaning to the Friendly Island”

Daniel Gibbs about a painful year: “Put true meaning to the Friendly Island”

MARIGOT, St. Martin – “This year 2015 was a painful one at a societal point of view: The terrible November 13 attacks in France of course, but also those in Mali, in Tunisia, in the United States ... reminds us of how much our society m

Comments Off on New parties come with joint statement about elections

St. Maarten – The five newly established political parties will come with a joint statement about the decision to move the elections from February 9 to September 26, Christian Party leader Wycliffe Smith told this newspaper yesterday evening. He d

Comments Off on Nagico 2016 calendar features artwork from local students

Comments Off on Winair expands service to Canefield in Dominica 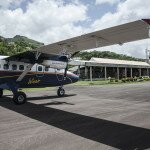 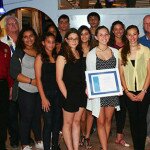 Members of the CIA interact Club pose for a picture with their Rotary sponsors and teacher advisors. Photo contributed. St. Maarten - The Rotary Club of St. Maarten Mid-Isle has sponsored the Interact Club of the Caribbean International