The wet season will be drier than normal too: Drought continued in July and August 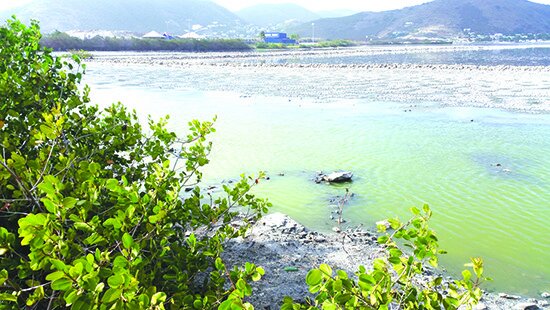 Water levels in the Great Salt Pond are extremely low due to the drought. Photo Today / Hilbert Haar

St. Maarten – The drought that has tested nature to the limit this year, continued in the months of July and August, data published by the Meteorological Department show. Cumulative rainfall up to August was 56 percent less than a year ago and the next three months are not looking much better in the sense that the Meteorological Department expects that rainfall up to November will also most likely be below normal.

The cumulative rainfall for the year stood at the end of July at 165.5 millimeter, compared to 437.9 millimeter in July 2014.

Other data show that in July 213.9 millimeter evaporated; in August evaporation levels stood at 179.8 millimeter.

The department bases its projection on global models, historical data and subjective input.