TelEm and Kelaha team up for awareness campaign 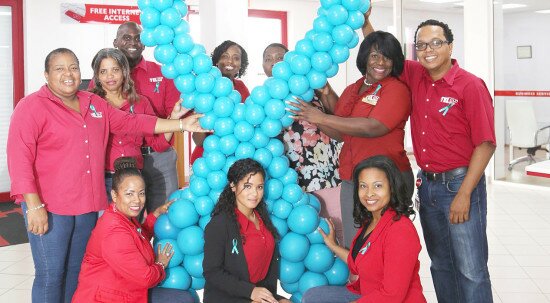 St. Maarten – TelEm Group is organising a month-long cervical cancer and prostate cancer awareness program for its staff. Earlier this year TelEm was the first corporate organisation to invite government’s mobile health bus to conduct health checks on its employees.

Now, for the entire month of September, personnel will be receiving information about the strategies they can use to help avoid cervical cancer and prostate cancer, how and where to test for both conditions, and how to cope with diagnosis and treatment.

TelEm Group’s Change Champions team coordinates the program with the assistance of the KeLaHa Project group. KeLaHa is also promoting cervical cancer awareness in September, and will also be conducting workshop sessions with TelEm Group staff.

A YouTube video supports the Change Champions effort; it was produced in-house. Giant models of the blue cervical cancer ribbon, a professionally printed brochure, posters and pamphlets are being circulated to staff and members of the public.

“We have erected a giant blue ribbon made out of balloons in the main foyer of the TelEm group main building on Pond Island so that the public can also be aware of what we are doing and also to give to the public information about cervical cancer and prostate cancer,” said spokesperson for the Change Champions group, Shadira Lont.

She said although September is the month designated for cervical cancer awareness, the Change Champions also included prostate cancer awareness because of the large number of men who make up the majority of workers in the company.

“We are urging all employees to take note of the information we are disseminating and to sign up for the workshops,” Lont said. She thanks Keoma Hamer of the KeLaHa Projects group for her involvement.

“Our staff has had a lot fun doing the promotional video and alerting their colleagues to some very real health concerns that they can do something about,” Lont said.

KeLaHa Projects is leading the campaign with the slogan: “Together We Fight – Together We Win” Cervical Cancer and HPV awareness project.  The group says its campaign helps women get the facts about cervical cancer by providing information about the disease.