Minister Richardson criticizes Attorney-General Schram: “Justify your claims or shut the hell up” 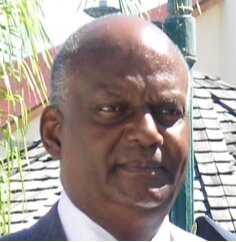 St. Maarten – “My position has changed: it is put up or shut up. Justify your claims or shut the hell up. This has to stop,” Justice Minister Dennis Richardson said yesterday afternoon in parliament about the statements Attorney-General Guus Schram made last Friday about the interconnection between the underworld and the legitimate part of St. Maarten’s society.

“There are numerous indications showing that the underworld and the legitimate society in St. Maarten are structurally intertwined,” Schram said. He noted that undermining criminality is “extraordinarily well-organized and more or less accepted by a large part of the society. It gnaws away at the foundations of our rule of law and democracy.”

Minister Richardson was visibly angry about this statement yesterday. “The reference to the interconnection between the under- and upperworld is an accusation of corruption across the board. I am tired of these accusations. Sometimes I get calls from my family in the Netherlands, asking what I am doing. On Friday the attorney-general made the same statements. He is considered to know and to act on facts as the head of the prosecutor’s office.”

Richardson said in parliament that from his negotiations in the Netherlands it has become clear that the priority for the Dutch is to tackle undermining criminality.

Ministers Plasterk (Kingdom Relations) and Van der Steur (Safety and Justice) are not prepared to honor Minister Richardson’s demand to move ten top detectives from the police force to the Detective Collaboration Team RST and to fill the gap they leave at the police force with ten new detectives. “That was not the intention, they told me. We need to move our detectives to the RST to prevent RST-detectives from making mistakes, but also to bring our officers to a higher level of performance.”

Richardson said that the protocol he signed with Minister Plasterk contains a provision for solving conflicts. “If we disagree we can go to the Council of State for advice. It is not that easy for the Netherlands to push something through that we oppose.”

The parliament met yesterday morning to discuss the protocol that contains agreements between the Netherlands and St. Maarten about the establishment if the Integrity Chamber and about strengthening law enforcement agencies.

Minister Richardson said that no members have been appointed yet to the Integrity Chamber, because the ordinance is not in effect yet. It has to go through a six-week waiting period for the Ombudsman to decide whether it contains anything that violates the constitution.

Changes to the Integrity Chamber legislation do not require the approval of the Netherlands, Richardson said. “They require consultation, which is normal if you have agreed together on something. I do not foresee the need for fundamental changes to the legislation during the first three years.”

The 2015 budget contains a reservation of 40,000 guilders for the Integrity Chamber. Once quartermaster Richard Begina has completed his task, there will be more clarity about the total costs of the project. “The Dutch have promised to co-finance the Chamber,” the minister said.

DP-MP Sarah Wescot-Williams asked about the financing of projects like an island-wide camera surveillance system, the expansion of the prison, the shooting range and the police substation in Cole Bay. “We want to ask financial supervisor Cft for an exception for the financing of these projects,” Minister Richardson said. “The current instruction blocks the possibility of capital investments and the access to cheap loans with a maximum interest rate of 2 percent. If the Cft does not agree with making an exception we will have to look at alternative ways of financing.”

For the shooting range there is still some money left from the 2014 budget, so that should not be a problem.

MP Frans Richardson went off topic with a question about changes to the civil code designed to tackle the abuse of short term contracts. “I understand that this is on the desk of the minister of justice,” the MP said.

Minister Richardson corrected him: “The legislation is currently at the Council of Advice.”

MPs also asked about the position of Gerard Bouman, the chief of the national police who made some waves in July with his remarks that he did not need anybody in St. Maarten to conduct investigations on the island. “I do not care about the opinion of Mr. Bouman,” Minister Richardson said. “I care about the opinion of the Dutch government. If they had shared Bouman’s opinion we would have had a little war, but that did not happen.”

The minister said that he did not know whether any measures had been taken against Bouman after his disastrous visit to St. Maarten.

The meeting closed at 1 p.m. and will continue tomorrow morning at 9 a.m. Minister Richardson will then answer remaining questions, but it is also possible that they will be provided in writing to parliament.

At the beginning of the meeting, Minister Richardson updated parliamentarians about his visit to the Netherlands where he met with Minister Plasterk and Van der Steur to clarify the status of the protocol. The Netherlands makes 22 million available to send 55 detectives to St. Maarten for the next two years.

The focus is on investigating undermining criminality. “Other aspects were not addressed in the press release the Dutch government published and I did not sign off on it,” Richardson said. “If there is rampant corruption in St. Maarten it has to be tackled, we do not have a difference of opinion there.”

Other issues are equally or more important: the increased violence and the understaffing of the police force for instance.

“We are making an inventory of what we need at the police, the prosecutor’s office and the prison. Part of that 22 million must be used for strengthening the police force. The negotiations about this are ongoing,” Richardson said.

The minister emphasized his wish to increase the participation of local police officers in the Detective Collaboration Team RST. “Our people are much better able to observe and to infiltrate. They know the people and the relationships.”

Today there are again talks about finalizing the agreements laid down in the protocol.

Several Members of Parliament expressed strong resistance against the deployment of 55 Dutch detectives to the island for the sake of investigating ‘undermining criminality (read: corruption).

“”How is St. Maarten going to benefit from the protocol and what are these 55 detectives going to do on our island?” MP Frans Richardson wondered. “Is it to create more smokescreens? We don’t need that. It cannot be that they just come here for a nice vacation, living in the best neighborhoods.”

Richardson said that the detectives “must live among our people in the community. How else will they know what is happening in Dutch Quarter and other districts. Those are the places where they must give us support.”

Richardson furthermore noted that judges, prosecutors and lawyers are “very frequently at cocktail parties” and that the country should create incentives to attract local young professionals into these professions.

MP Johan Leonard railed against the presence of non-locals in law enforcement agencies, even pointing to Chief Commissioner Peter de Witte and to Udo Aron (“a Surinamese”), saying that locals should be in these positions.

In more subdues terms, MP George Pantophlet, expressed the same sentiment with a remark about a meeting at the courthouse where he had seen “80 lawyers – all Dutch-Europeans.” He also noted that talk about strengthening law enforcement dates back nine years, to the day St. Maarten signed the Slotverklaring in November 2006.

MP Silveria Jacobs noted that tackling high impact crime is apparently not a priority for the Dutch government. “We are also concerned about integrity on all levels,” she said. “But we also believe that we should not be spending millions of dollars on one particular problem.”

Working only on imprisonment without looking at the source of the problems is not going to solve anything, Jacobs pointed out. “If we do not pay for education, we will pay triple on the other end in the justice system.”

UP faction leader Franklin Meyers also supported Johan Leonard’s cry for more locals in the police force. “I want those Dutch detectives to report to Carl John or to Richard (Panneflek – ed.). they should not come here with their own agenda.”

Meyers asked to whom the Dutch detectives will report and from whom they will get their instructions.

MP Lena Marlin asked for a contingency plan: “We have to strengthen the police academy and make sure that the detectives who come here from the Netherlands transfer their know-how to local detectives.”

MP Cornelius de Weever said strengthening the prosecutor’s office should be part of the protocol, because handling cases is taking often too long. He also asked how many cases of corruption the RST has investigated during the years the organization has been on the island and how many corruption cases there are in the Netherlands compared to St. Maarten.