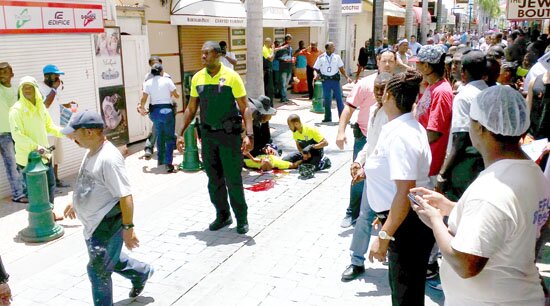 Police officers keep the crowd at bay as others attend to the downed officer in the background. Photo Today / Hilbert Haar

Chief Commissioner De Witte: “This is a sad day”

– Shortly after the Central Committee meeting of parliament ended total panic broke out in town due to a shooting that took place just outside the parliament building. Politicians and staff who had just left the building stormed back inside as shots rang out.

In Front Street, bike patrol officer Gamali Benjamin lay on the street in a pool of blood. Emotional colleagues kept the panicked public at bay while awaiting medical assistance.

According to a joint press release of the police force and the prosecutor’s office, two bike patrol officers responded to a report about an armed robbery at the Oro Diamante Jewelry Store on Front Street.

Officer Gamali Benjamin approached the main entrance and encountered one of the robbers who started firing immediately. Benjamin went down, severely injured. His colleague returned fire and hit the suspect several times. The robber and an accomplice escaped on foot through the Wilhelmina Steeg past the parliament building, leaving a dirt bike behind. The wounded suspect was shot and arrested on Cannegieter Street but the second robber managed to escape.

The escaped suspect is between 17 and 20 years of age. He is considered armed and very dangerous, the press release stated. The suspect has a normal posture, wears dark sneakers, white socks, a white tee shirt with big brown stripes and shorts. His hair is long with one braid with white beads.

The police advices citizens not to approach the suspect but to call the tip line at #9300 when they catch sight of him.

The shooters drove a red bike without number plates but they left it behind. The robbers fled past the parliament building yowards Cannegieter street in the vicinity of the RBC Bank.

Soon afterwards, the Wilhelmina Steeg and part of Front Street from the courthouse towards the location of the shooting had been cordoned off as a crime scene. In front of the parliament building, two helmets and a pair of work gloves were left behind by the shooter and his passenger. The bike stood abandoned against the fence of the courthouse.

The parliament canceled the afternoon meeting of the committee for Kingdom Affairs and Inter-Parliamentary Relations because of the shooting.

Benjamin’s colleagues, including Chief commissioner Peter de Witte, were anxiously waiting for news that he would pull through at the hospital.

Asked whether the police had bullet proof vests at its disposal, De Witte told this newspaper that they have been ordered “a long time ago.” When the vests will arrive, he could not say. “The most important thing right now is the surgery of the victim,” he said.

The scene at the St Maarten Medical Center was an emotional roller coaster as on and off duty officers arrived. Some of the female officers were close to tears but from the expressions on the faces on the men, it was evident that they felt hurt.

Minister of Justice Dennis Richardson, who arrived shortly afterwards was quick to console at least one female officer. He also spoke briefly with the father of the injured officer.

“There are procedures to be followed whenever there is a dangerous situation and the police are trained in how to deal with them but that does not guarantee that nothing bad can happen,” Richardson said. “You have to understand that the police put their life on the line every day for the safety of St Maarten. But no stone will be left unturned, I will be taking a very serious look at the situation we are in and take the necessary steps.”

The Minister cannot recall the last time the police came under fire. “This is the first serious injury to an officer on this island in decades. There were none since 1994 when I was the governor.”

“For now, they are trying to stabilize him and we do hope that the operation is successful,” Chief Commissioner Peter de Witte said. “They are making arrangements to fly him out for further treatment  It’s a very sad day, we are all very emotional so we just have to wait and see what happens.”

The man that was shot in his bid to escape is also receiving treatment but he is not in a serious condition, De Witte said.

Early in the evening, Prime  Minister Marcel Gumbs sent out a press statement saying “that the nation is shocked by the callous act” while officer Benjamin was carrying out his duties.

“We pray that officer Benjamin will pull through this very difficult time and we pray for his family for the Almighty to give them strength during this very trying moment.”

Gumbs said “that all measures based on the rule of law will be taken to address the spate of criminal activity that has beset the Philipsburg area and other communities throughout the country.”

The board of the United People’s party said it is still reeling from the shooting. Party-leader Theo Heyliger, who was at the parliament building yesterday morning, watched the scene on Front Street first-hand.

“We join the nation in prayer as we wish for the officer’s full recovery.  Our prayers go to the family and friends of Officer Gamali Benjamin who was honorably serving and protecting our country,” the statement read.

The Up is calling for “swift action”  by all stakeholders to remedy this tragedy and to curb the ongoing crime issues.”

“The negative consequences crime will have on our country will be catastrophic if we do not curb this immediately especially since our main economic pillar is tourism. Our country must band together and subscribe to the age old saying of being your brother’s keeper and to continue living in unwavering harmony,”  the statement read..