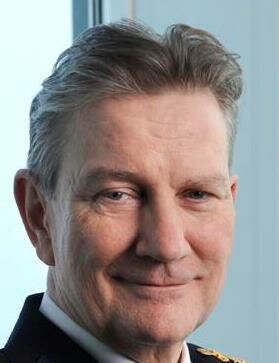 St. Maarten – Gerard Bouman the Chief Commissioner of the Dutch national police force has left St. Maarten with mixed and mostly negative feelings. This appears from an email Bouman sent to police officers under his command after his return to the Netherlands. This newspaper obtained a copy of it.

“Everybody on the island knows that the gambling industry has been in the hands of a notorious gambling Mafioso,” Bouman writes. “Example, after example after example.”

The police chief writes that in Sint Maarten “the criminal undermining of the community and the integrity issues that are linked to it are taking on extremely worrisome proportions.”

Bouman bases this opinion on talks with members of the Detective Collaboration Team RST, but stories he heard from “dejected citizens’ also spoke volumes, he writes. “Somebody pointed out to me that the brand new government building has been standing empty for already five years (actually, it’s more like seven years – ed.). Civil servants are doing their jobs still in small and costly offices spread around the island. Apparently there are powers at work that make this possible.”

Bouman notes that the fusion of the upper and the underworld “keeps the community in a chokehold. This phenomenon threatens the safety and the economy in this area. The islands are strongly dependent on tourism.”

Bouman adds that the disappearance of Natalie Holloway in Aruba in 2005 “almost resulted in a boycott by American cruise ships,” saying that this would have been fatal. “Unfortunately, if things continue this way, that doom scenario is not unthinkable in the near future. On top of this, we sense an increasingly and inadmissible spread of criminal activities towards our country.”

Bouman further confirms that the Dutch police will send two teams of 25 fte’s (full time units) to St. Maarten, mainly detectives. “This approach makes it possible to do several investigations simultaneously. On location five additional fte’s provided the necessary support and there will be a special back office at the national unit (the National Detective Agency – ed.).”

The recruitment for these teams begins in September, Bouman writes. “In principle someone is going to the Antilles for one large investigation and returns afterwards. This choice has among other things to do with guaranteeing everybody’s safety.”

Bouman adds that RST-detectives, who spend three to five years in the Antilles, are struggling to adjust upon their return to the Netherlands and says that he wants to prevent this,

Bouman writes that pushing back criminality and undermining in St. Maarten is part of a larger master plan. “That demands fundamentally more money. The objective is to strengthen the police, the Public Prosecutor’s Office and the judicial structurally. They will get the qualitative and quantitative impulse they need to make a clean sweep on all islands, beginning with St. Maarten.”

Bouman closes of his email with the remark that he may pay a follow up working visit to the islands in the foreseeable future.