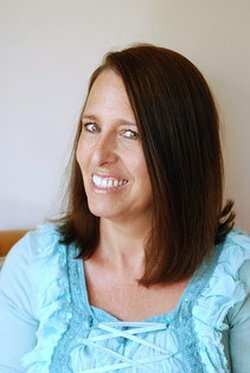 St. Maarten – Sandra Bernstein, better known as Sandy is a quirky, charismatic and extremely loyal makeup artist in her fifties. Her hobby is crime. When she loses her job on a daytime soap, she moves to St. Maarten to work on a blockbuster film. On the first day on the set, she finds the body of an actor – her client. This begins From Makeup to Murder, a classic whodunnit by the British author Jacky Rom. Tomorrow she presents her book, the first of what is to become a series of the Sandra Bernstein Chronicles, at Toppers in Simpson Bay.

Rom, who is in her late fifties, grew up in Romford Essex; she trained as a hairdresser and makeup artiste and tried to fulfill one of her first dreams of becoming a director at the tender age of 16. Not a good idea, her careers advisor told her about her plan to go to the London College of Fashion, but she went all the same and ended up as a drama teacher.
Rom wrote her first play when she was seventeen and she has written and directed many plays over the years. She spent many years in TV and film studios with her own up and coming actors. Just over a year ago she decided to write her first book.
The Missing Extra, takes place in Pinewood Studios a studio complex that Rom has been to many times. Lots of her characters are taken from real life experiences of people she met along the way.
In 2008 Rom turned 50 and decided to take a month off from work and go and stay in the Caribbean. “But,” she thought to herself, “What am I going to do for a whole month?” That when she came up with the idea of writing book. That dream turned into a series of five books all about the adventures of an eleven-year old detective.
Rom’s latest, from Makeup to Murder comes across as a self-portrait – Jacky Rom playing Sandra Bernstein. Whether this is really so, we will learn tomorrow during the book presentation.