Lysanne Charles-Arrindell makes a good case for the LBGTI-community on the island in our front-page article. Her organization is not at war with the church and it is not looking for the legalization of religious same-sex marriages. Giving citizens

Dear Editor, Today’s editorial of Monday, July 20 missed the point that I was making for calling on government for a better plan to lure professionals back home. The editor’s opinion is respected, but he made my point much clear

Opinion: Outside the box

We appreciate MP Maurice Lake’s elucidation on his call for more incentives for local professionals, but it has done little to change our point of view. The bottom line is that an incentive is something you give away in exchange for a service. L 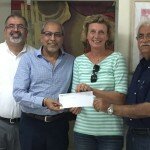 Jose Sommers (center) holds the check together with Ramu Dawtani (right) and IMA-President Prakash Mirpuri while other board members look on. Photo contributed At Hillside St. Peters School St. Maarten - Last week the Indian Merchant As 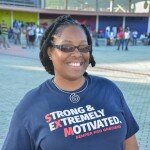 Safe SXM president Lysanne Charles-Arrindell: “We are not at war with the church”

Safe SXM President Lysanne Charles-Arrindell. Photo Contributed St. Maarten / By Andrew Dick - The Lesbian, Bisexual, Gay, Transgender and Intersexual (LBGTI) community on the island is getting more reconciliation for its work than before. 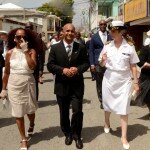 Attorney Patricia Chance-Duzant is on a roll during her address. Photo Today / Leo Brown         GRAND CASE, St. Martin – Victor Schoelcher, the 19th-century abolitionist writer who had a large influence on the abol

St. Maarten – A masked intruder robbed and seriously injured a 65-year-old man in his home on the Calabas Drive in Almond Grove on Monday afternoon around 3.30 p.m. The intruder beat his victim after the latter confronted him. After the ill-trea 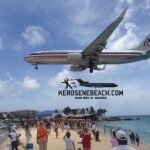 St. Maarten – A female cruise tourist sustained serious injuries in the blast zone behind the runway of the Princess Juliana International Airport (SXM/TNCM) on Monday afternoon. When a commercial plane took off, it blew the woman’s hat from her