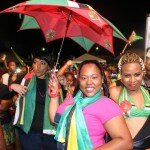 On the surface it seems like the two girls who attempted to smuggle drugs into the Pointe Blanche prison yesterday are utterly dumb. Who puts a bunch of ecstasy pills in his pocket for a visit to the prison? That is asking for trouble, right? Ther

St. Maarten – The captain and the helmsman of the fishing vessel Raton who made a failed attempt to smuggle three Brazilians via St. Maarten to the British Virgin Islands in February of last year could still get a prison sentence to their name. Th

Girls caught with drugs for inmates

St. Maarten – Police detained a 19-year-old girl and a 22-year-old yesterday after security caught them in two separate attempts to smuggle drugs into the Pointe Blanche prison during visiting hours. The 19-year-old, identified as L.D. came to

St. Maarten – Police arrested a woman identified as Y.M. at the Festival Village on Friday evening around 11.15 p.m. after discovering that she was carrying a knife. The woman appeared before the acting prosecutor at the police station and accepte

St. Maarten (DCOMM) – The application process for the annual hurricane emergency passes for the 2015 Atlantic Hurricane Season which starts from June 1 to November 30, begins tomorrow and is only applicable for the business sector and vital organi 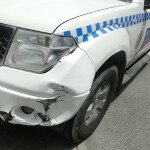 The police car took a hit when the robbery-suspects attempted to get away. Photo KPSM St. Maarten – Within two-and-a-half hours, two supermarkets and a restaurant became the victims of armed robberies on Saturday evening. After the last one