Members of Parliament love talking about creating jobs for the people. The latest cry is coming from MP Maurice Lake, the former Minister of Vromi, who urges the government to create work for local contractors. It sounds sympathetic – no questio

Je suis encore Charlie, but the opinions about freedom of expression are not shared by everyone. Take for instance the Peace Church in Nijkerk – a city comparable with Sint Maarten in population (40,618 in May of last year) – located in the Dutch

The Church of TED

CHANCES are you will not attend TED this year. Tickets to the gathering that begins today in Vancouver are sold out, this despite or rather because of the fact that gaining entry to the ideas conference entails more than pulling out your credit card

St. Maarten - Armed suspects robbed Little Europe jewelry store on Front Street on Saturday morning between 10:30 and 11:00m and escaped in a waiting getaway vehicle that was later found by the police. Little Europe Jewelry Store is located on Fr

St. Maarten —The time has come for the establishment of a Consumer Protection Agency locally, independent MP Leona Marlin-Romeo opined yesterday, pointing out that consumer protection laws exists locally but there is no body to execute such laws. 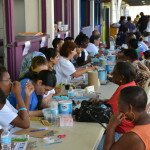 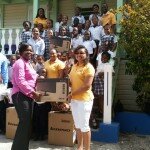 St. Maarten -  “It is high time that Government and Parliament start empowering our local people to be tops where it concerns jobs and other relevant areas in the country,” UP MP and former Vromi Minister Maurice Lake said yesterday while conte

St. Maarten - Minister of TEATT Claret Connor visited the Methodist Agogic Center (MAC), St. John’s Campus and spoke to the 3rd grade students of campus 1 & 2 about tourism and how it affects their lives. The visit is in keeping with the Min

St. Maarten - Member of Parliament George Pantophlet disclosed yesterday that he will be submitting some questions to Minister of Finance Martin Hassink regarding the setting up of an internal control department. Pantophlet also plans to request a c

St. Maarten - On Saturday March 14th at approximately 04.40 p.m. a police patrol was sent to a home on Betty’s Estate road to intervene in a dispute. On the scene the officers knocked on the door of the home which was immediately opened by a femal

St. Maarten —The investigation into the selling of SZV medical cards continues and SZV has assured interim Minister of Health and Social Development Rita Bourne-Gumbs that the matter is being addressed and treated with the urgency it deserves.

St. Maarten - In response to mounting reports of youth involved in crimes, First Response has launched an initiative to provide kids with alternative interests. The safety and security company has begun a community safety and security drive dubbed F

Aruban teen mothers are getting younger

ORANJESTAD – “When I wake up in the morning and my little son looks at me from his cradle I really get warm inside.” Fifteen-year-old teen-mom Paula forgets her stress in those moments. “This school year I will have to do over again. I am arg

GREATBAY—One St. Maarten Party is in support of a call issued by parliamentarians to have an operational audit done at the harbor, a call which was earlier issued by the OSPP. “ We have been following with keen attention all the activities tha

GREATBAY--- St. Maarten Academy PSVE, an institution that empowers and equip students with a foundation in academic, technical and life skills, had its first Open House on Thursday March 12th. The Open House was for all parents of students who are pr