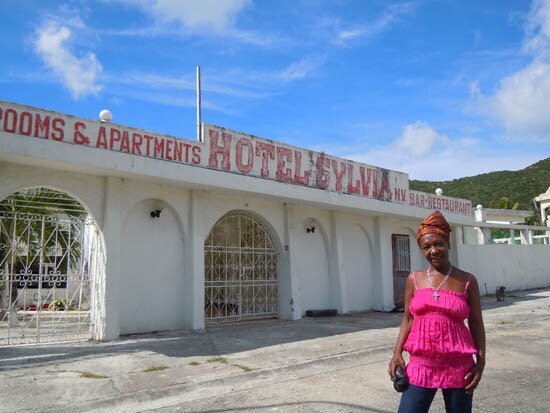 In the night from Saturday to Sunday Chantel Prince passed away at the Mental Health Foundation after a long illness. She was 58.

It is usually not done for journalist to write about topics they are close to in their private lives, but for Chantel, and for my wife Myriam who was her friend and caregiver since she met her in the summer of 2010, I will make an exception. This is personal indeed.

In 2007, the name of Chantel Prince made it into the local media for the first time, as far as I am able to remember. Homeless and haunted by psychological problems, she was living in a car wreck and at the time, the Mental Health Foundation just did not know what to do, other than make an appeal to citizens for help.

That help came from Holland House that offered Chantel shelter for a couple of months, but in the end, the arrangement did not work out and she returned to the streets.

In 2010, she ended up in court on charges of shoplifting and some other minor stuff. Her court appearance was the best thing that ever happened to her, because that is when Chantel met Myriam, who was at the time working as an interpreter at the court.

The heart-wrenching story that landed Chantel in prison and in court touched a nerve and set in motion a series of events that would keep Chantel out of trouble for the rest of her life.

Given the fact that Chantel would end up on the streets again if the court released her, the prosecution demanded that she stay in prison for an additional two weeks to find a solution for her state of homelessness.

That is when My wife Myriam went to work. She visited all the guesthouses on the Dutch side and finally found the Soualiga Guest House on the Pondfill prepared to take her in. Nagico Insurances CEO Imran McSood Amjad sponsored Chantel’s stay, and Mr. Gumbs, the innkeeper, took a liking to his very special guest. Later, the St. Maarten Hospitality and Trade Association SHTA took over the sponsorship until the Mental Health Foundation facility in Cay Hill in the former Hotel Sylvia was completed.

There, Chantel found shelter in a private room where she surrounded herself with Harry Potter posters, her music, her TV and her dedication to her faith. Myriam visited her numerous times; came Christmas or New Year, we would pick up Chantel and spend time with her either at our home or someplace where we could watch the fireworks.

Many people in town have known Chantel; she arrived around twenty years ago from Dominica in St. Maarten. When acquaintances commented on how good she looked during her last years, she would smile and say: “I have a friend who is looking after me now.”

It was clear for some time already that Chantel’s health was deteriorating. The question was no longer if she would pass away, but when this would happen. She spent some time in hospital, before returning to her room at the Mental Health Foundation where a caring staff saw to her every need. Myriam spent countless hours with Chantel at the hospital and later at the Mental Health Foundation.

Of course, we decorated her room for Christmas, even though during the last weeks Chantel was not always aware of her surroundings anymore. But when Myriam appeared at her bedside, her eyes used to light up – her friend was there again.

Saturday afternoon was the last time Myriam stood by Chantel’s bedside, concerned about her labored breathing, but there was nothing the doctors could do for her anymore. When the phone call came shortly after 2 a.m. on Sunday morning, we found comfort in the thought that Chantel’s journey on this earth had ended in a peaceful environment where she found during these last three years of her life the love and care that had eluded her for so long.

Chantel leaves two sons, one daughter and two grandchildren to mourn her.