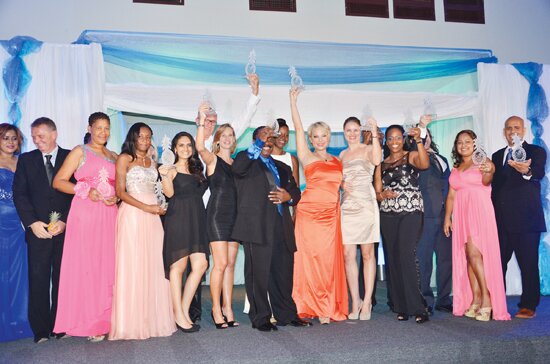 St. Maarten – The St. Maarten Hospitality and Trade association SHTA decorated Jan retired banker Jan Beaujon Friday evening as its Person of the Year during the eighth Crystal Pineapple Awards fundraiser gala dinner at the Sonesta Maho Beach Resort and Casino. Beaujon was off island and his wife was at hand to receive the award on his behalf. Chef Dino Jagtiani received the Tourism Ambassador Award.

The SHTA issued awards in twelve categories that were open for online voting on the 45 nominees, and in six non-voting categories, where the winners were chosen by the SHTA-board.

The Today Newspaper received the 2013 Public Media Award from Shawn Caraker Paulus of HCP/Aboard Publishing in Miami – a strategic partner of the SHTA that publishes the in-room guide Experience St. Maarten – and SHTA president Emil Lee who described our newspaper as a true watchdog of our democracy. “This newspaper has focused its editorial efforts on transparency, accountability, integrity, good governance, human rights and the protection of the environment, much of what the SHTA stands for,” Lee said, adding that the newspaper is “truly independent” and “free of affiliations with any political party or politician.”

Lee added that Today values “maintaining the luxury of two quality newspapers in a relative small country” over competition. “The paper’s consistent fight for integrity aims to contribute to a more attractive business environment for reasons that concern us all: when the economy booms all citizens benefit.” 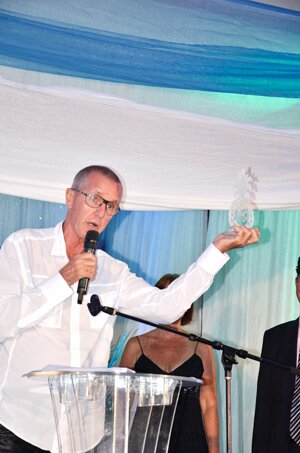 Editor-in-Chief Hilbert Haar accepted the award and said in a brief acknowledgement that he had advised the SHTA several years ago not to add an award for journalism to the Crystal Pineapple Awards event because of the small scale of the media community. “Somebody is going to get hurt and the other guy will get a huge ego that his wife will have to deal with,” he said, adding that Today will “keep up the good work.”

The second nominee in the media category was Teen Times, a publication of the Daily Herald. Editor-in-Chief Nympha Richardson was at hand to receive her nomination. That Teen Times did not win a Crystal Pineapple Award is certainly not a disqualification of the young team that produces this newspaper. Teen Times appeared for the first time in 1996 and, after a brief interruption from 2008, reappeared stating in 2011. Its journalists are young students that produce a quality newspaper in which they tackle subjects that concern young people. In a way, Teen Times holds a lot of promise for a future generation of local journalists.

The well attended event started with a cocktail party, before the nominees and their supporters moved into the dining hall where King Beau Beau received them as the evening’s MC. Later that evening the MC would cause some hilarity after one of the raffle prizes fell on a ticket held by his wife Anne-Marie.

Ministers Patricia Lourens (Education, Culture, Youth and Sports) and Ted Richardson (Tourism, Economic Affairs, Transport and Telecommunication) as did the president of parliament Drs. Gracita Arrindell. All had at some time or other an active role in handing down the awards.

After SHTA-employee Anenda Zaandam had opened the evening with her rendition of the St. Maarten song, President Lee quipped about the efficiency of the private sector. “We hire staff that can sing, so they provide the entertainment as well.”

On a more serious note, Lee said that he loves the Crystal Pineapple Award evening. “It is the end of the hurricane season; we have been fortunate this year because there have been no major storms. This is also the end of the low season, and the beginning of the money making season.”

Paul van Vliet of PriceWaterhouseCoopers presented the sealed envelopes with the names of the award winners. “This is the eighth time that I get to handle the envelopes with all the winners,” Van Vliet said, adding that the evening is not only about the winners. “By getting nominated and getting more than one vote you are all winners,” he said.

Interval International received the Outstanding Tourism Industry Award. Neil Kolton accepted the award from Minister Ted Richardson and SHTA board member Ricardo Perez. Kolton announced that four local resorts had raised $535,000 for the Caribbean Hotel and Tourism Association’s Education Foundation. This foundation offers scholarships to young professionals that pursue a career in the tourism and hospitality industry in the Caribbean. The contributing resorts are Oyster Bay Beach Resort, the Westin Dawn Beach Resort, Diamond International and the Simpson Bay Beach Resort and Marina. 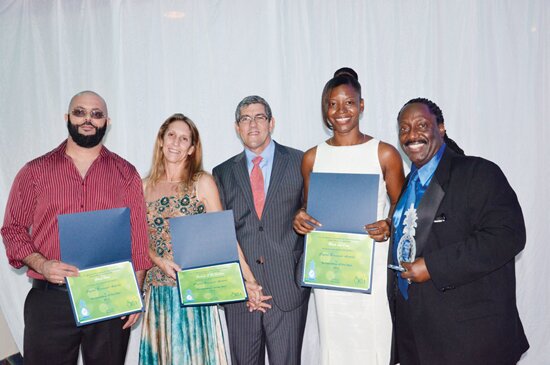 Erwin Wolthuis, vice-president of the Foresee Foundation made a presentation about the Digikidz project that held a surprise for the Christian Hillside primary school: it became the first recipient of support from the foundation. Digikidz pumps almost $1 million into this project in St. Maarten. Digikidz is a comprehensive ICT project for elementary schools that includes hardware with laptops and tablets, wired and wireless networks and professional training for staff.

Asha Stevens of the Christian Hillside School was completely taken aback by the announcement. “I knew I had to be here but I had no idea, I am completely surprised,” she said. “I did not know this was in the pipeline. This will benefit our children, our future.”

The winners in the online voting categories are in the category restaurants: Employee of the year: Paul Peterson- Temptation, Manager/supervisor of the year: Juan Miquel Philips – Domino’s Pizza, Restaurateur of the year: Mark van Dam – Marks Place. 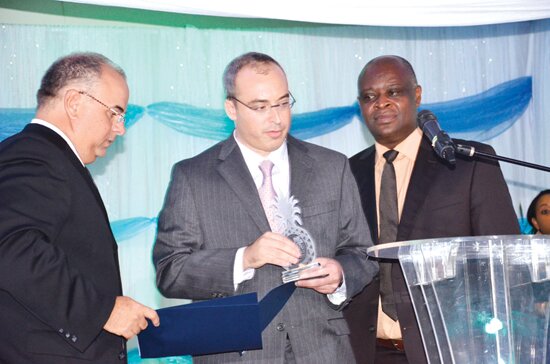 When all the awards were in the hands of their respective winners and the dinner was history, the Control Band got quite some guests on the dance floor. 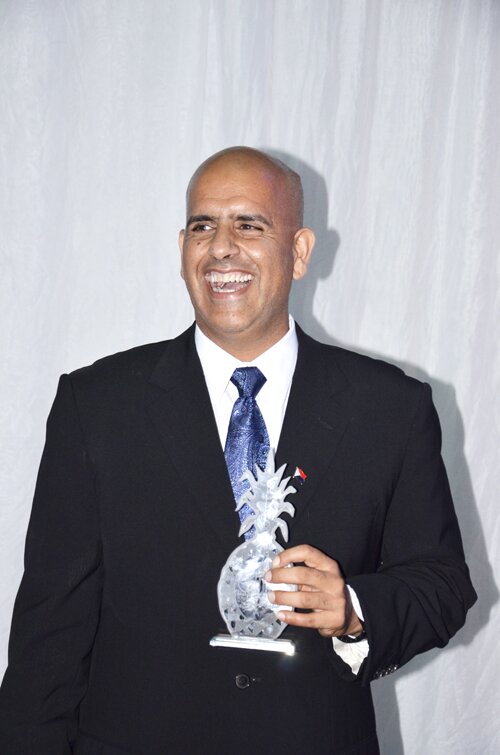 Did you like this? Share it:
Tweet
Today Newspaper honored with Public Media Award 2013 - Crystal Pineapple Awards names Jan Beaujon Person of the Year by admin