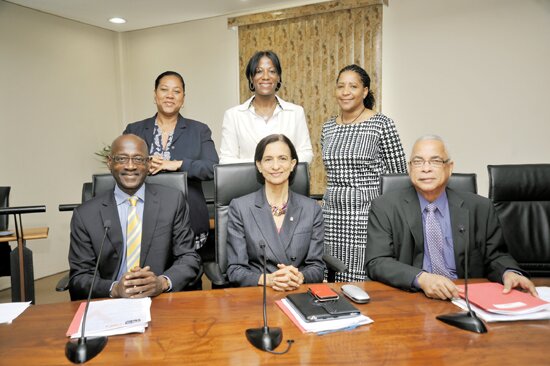 St. Maarten – Prime Minister Sarah Wescot-Williams introduced the National Organizing Committee (NOC) to the public yesterday. She explained that the committee was established by national decree specifically for the purpose of organizing the logistics of the royal visit. “The committee is responsible for all financial matters and will have to naturally provide the proper account for allowances made available to the committee by government,” the prime minister stressed.

On November 12, His Majesty King Willem Alexander and his wife Queen Maxima will be visiting St. Maarten as part of the royal couple’s Dutch Caribbean tour. It will be Willem Alexander’s first visit to the island in his role as sovereign of the Kingdom of the Netherlands.

The committee has a budget of about 470,000 guilders or $264,000, though whatever is unused will be given back to government. The royal couple will be staying at the Divi Little Bay Resort because of its proximity to Philipsburg and all the festivities, it was explained.

Although the royal couple arrives on November 12, they will have some private down time before the day long activities kick off the following day. There will be a busy schedule of events planned.

“Significant to the general public will be that St. Maarten will be the first island to be visited out of the Kingdom,” Franca pointed out. “St. Maarten has always had a tradition of warm welcoming of visitors to our shores.”He said that highlights for the public will be the visit to the Clem Labega square, where the official welcome begins at 9am. “It’s something very formal, something must see,” he said, since the last one was held at the Princess Juliana International Airport and was therefore not accessible to everyone. “We think the event that will happen here, the Clem Labega Square, is worthwhile seeing.”

Governor Eugene Holiday and his wife, along with Prime Minister Sarah Wescot-Williams, will greet the King and Queen. After the playing of the national anthems of both St. Maarten and the Netherlands, there will be an inspection of the uniformed troops of the island and a presentation of a bouquet of flowers to Her Majesty Queen Maxima from a student of the Prince Willem Alexander School.

At 10 am the royal couple will meet with local MPs at the parliament building and followed with an official meeting with the Council of Ministers.

After a short break the royal couple will visit Milton Peters College, the Raoul Illidge Sports Complex, and then take a stroll through Frontstreet touring the historic buildings. Marcel Gumbs said the monument walk “would be a great opportunity for the St. Maarten public to see the royal couple.” It will start at the Oranje School on Frontstreet and then walk up from there, briefly stopping at the local historic buildings in the town like the Methodist church and the Courthouse. “It was a great idea to showcase Philipsburg,” Franca added.

The evening will be capped off with a display of St. Maarten’s young talent. Franca said that the “Youth Showcase” at the Festival Village will feature over 250 local youngsters.

“We extend invitations to St. Maarten to all these events,” Franca said. He also urged the local community to decorate their property accordingly starting with St. Maarten’s Day.