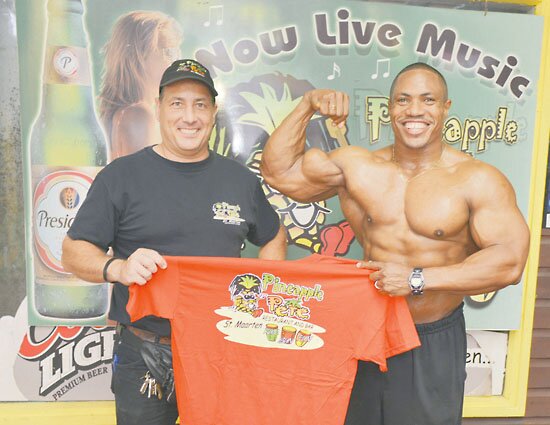 Pierre Ferland, Head at Pineapple Pete, shares a light moment with Desmond Patterson who will be competing in the heavy weight category at this year’s CAC Bodybuilding & Fitness Championships in the Dominican Republic this weekend. Photo Today / Milton Pieters photo.

The athletes along with members of the SMBB&FA board are expected to wing out for the Dominican Republic this afternoon to keep their appointment with the highly anticipated championships that will take place on Friday and Saturday at the Rennaissance Jaragua Hotel, located on Avenida George Washington on Saturday and Sunday.

Desmond Patterson is the lone male participant; he will be making his second appearance in the competition, but this time in the heavy weight division. Maudienne Provas is the only female body builder on the team; the third athlete is Cleopatra Carti who will be competing in the fitness competition.

However, Patterson who was able to finish in the top six on his first outing has spared no efforts to get into shape this time and once again he has been able to get Pineapple Pete to come on board as his main sponsor.

“He looks bigger and better this time and that is due to his discipline and dedication,” said Pierre Ferland, the Head at Pineapple Pete when Patterson made a brief visit to the Restaurant & Bar yesterday.

Pierre, who is also trained by Patterson, is just one of those persons that have been keeping an eye on his development over the past months. However, the President of the SMBB&FA, Martin Wilson is upbeat about the events leading up to the big event.

“The local athletes are in tip top shape, we are ready to go out there and make St Maarten proud and that alone will boost our efforts as we prepare to host the 42nd annual Central American & Caribbean Bodybuilding & Fitness Championships next year,” Wilson stated.

However, the local athletes will not only have members of the SMBB&FA to cheer them on while they are on stage; there is also a select group of supporters that has been very supportive to the sport of bodybuilding and fitness over the years.

When asked to comment on the possibilities of the athletes from the French side of the island medalling at this tournament Wilson said that in the past they did not do so well, but after the performances at the competition which were held on that side of the island, he is of the opinion that they can do better this time.

“They have improved tremendously and they should win a medal or two this year, for sure, I know we are coming back with gold,” he stated. According to Wilson, over 100 athletes from 21 countries participated in the CAC Games which was held in Puerto Rico.

But despite the fact that the requirements to enter the Dominican Republic are not that difficult for would be participants, flight connections from some countries can be frustrating and that in itself can play a major role in the number of participants in the championships.

The SMBB&FA will be saddled with the responsibilities of organizing the next championship on the friendly island.  This event in the Dominican Republic will be another learning experience and they are expected to have an eye for detail in order to make the next event a huge success.