Prime Minister Wescot-Williams prefers that the media engage in self-regulation. Here is a news flash: at Today we have regulated ourselves already. We respect the code of conduct the International Federation of Journalists established in 1954 in Gen

Cees Renckens is not just anybody. He is a gynecologist and until two years ago he was the chairman of the Association Against quackery in the Netherlands. Assuming that Renckens is not a fan of alternative healing is therefore a safe bet. Remarkably 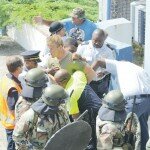 The awesome physical power of one marine was exemplified when it took at least five local police officers to restrain him during the mock riot drills as part of Operation Hurex which took place yesterday in Sucker Garden. Photo Today/Milton Piete

St. Maarten – The Council of Ministers did yet not deal with the recommendations affecting local media that Vromi-Minister Maurice Lake outlined this weekend, Prime Minister Sarah Wescot-Williams said at yesterday’s press briefing. “But the gov

Proposals for Cola to be presented – Unions meet in GOA today

St. Maarten -Unions representing civil servants and teachers are expected to meet today in the Organized Consultative Body (GOA) to discuss the cost of living adjustment payout. The meeting is based on an invitation from Prime Minister Sarah Wescot-W

All Sona-funds will be used, PM assures

St. Maarten – The Council of Ministers met with the board of Sona, the development foundation for the Netherlands Antilles to discuss the termination of Sona-funds for projects in St. Maarten, Prime Minister Sarah Wescot-Williams said at yesterday�

Car-specialist may go to prison for twelve months

St. Maarten – Juan Rafaelin E. is apparently good with cars but that skill landed him behind bars and in the courthouse yesterday, where he had to answer to charges that varied from forging a bill of sale and stealing a car to stealing or fencing c

St. Maarten – On April 13, the parliament passed a motion from Independent MP Frans Richardson that asked the government within 60 days for an “updated schedule” about the completion of the new government administration building on Pond Island

St. Maarten – All appeals in the Vesuvius-trial will begin on November 26. The seven defendants will then appear before the Common Court of Justice. The appeal hearings will conclude on November 29, and the court rulings are expected three weeks la