The government has put a stop on hiring new personnel. That sounds like a wise move, even though there will of course always be critical vacancies that must be filled. But for now, with the financial quandary the country has maneuvered itself into

We don’t know what it is with this much talked-about but hardly understood National Development Plan. Every discussion we hear about it, every initiative we read about, gives us the feeling of a wishy-washy soooo sixties program. It also gives us t 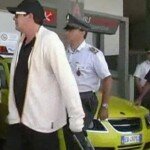 St. Maarten – Erno Labega Jr. refused to come to court yesterday morning the face charges for his involvement in a fight that took place at the Bada Bing adult entertainment club on February 3, 2011. Labega did not appreciate the security measures

WILLEMSTAD – It is not clear whether the 43-year-old woman with the initials M.A.B., who was arrested on Saturday, will be presented as a ‘star witness’ in the murder case of the politician and Member of Parliament, Helmin Wiels. According t

Casino cashier made up robbery to mask theft

St. Maarten – A cashier at the Casino Royale in Maho who invented an armed robbery to mask the theft of close to $2,700 from her employer received a 3-month prison sentence with 1 month conditional in the Court in First Instance yesterday. The 47-y