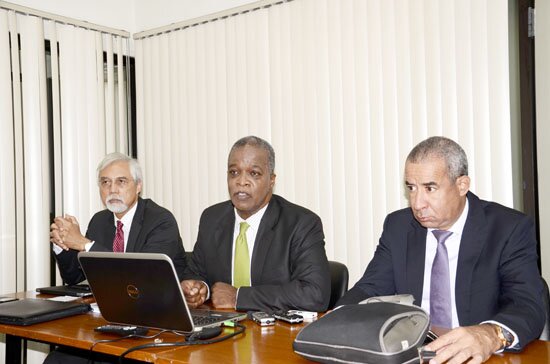 St. Maarten – The President of the Central Bank for Curacao and St. Maarten, Emsley Tromp, said yesterday that the important thing for the government of St. Maarten to do is to create “confidence in our economy.” Otherwise, the president warned, “the rest of the world may no longer want to invest in our economy.”

Tromp gave a presentation at the central bank branch in Philipsburg to the local press. “The need for growth is important,” he stressed. The president strongly urged the island “to finally focus on the much-needed policy reforms, which have been recommended in countless assessment reports until now.” These reforms are aimed at boosting productivity by shedding excessive and abundant red tape in the bureaucracy, and relaxing an otherwise rigid labor market, combined with a more “red carpet” treatment of potential investment, if real growth is to occur according to the island’s top economist.

“The overall economic performance in Curacao and St. Maarten has been dismal since they became autonomous countries in the Dutch Kingdom,” the president said, averaging zero growth between 2010 and 2012, while the region as a whole has experienced an average of 3% GDP growth during the same period.

“In St. Maarten, the government should focus on sorting its budgetary woes as soon as possible, in order to be able to proceed with the implementation of its investment projects, among which, the finalization of the government building and several road work projects,” the president pointed out. “The sluggish pace of economic growth requires bold actions” by the government of St. Maarten. “A higher growth path is also critical to improve the social environment for our citizens,” he reminded everyone.

“In St. Maarten, real GDP grew by 1.5% in 2012,” the president outlined, though he was quick to point out that there was “contraction followed by expansion, but on average no real growth” in the last 3 years. Although “consumer inflation eased to 4% against 4.6% in 2011, caused mainly by a deceleration of international oil prices,” Tromp further explained.

“The growth in stay-over arrivals contributed to more passengers handled at the airport, while the harbor of St. Maarten registered an increase in the number of ships piloted into the port and a rise in cargo movements,” the president went on. He added, however, that “growth in the construction sector of St. Maarten was flat in 2012 as an increase in public construction projects, including a public housing project, was offset by a decline in private investment projects.”

Tromp’s advice for St. Maarten’s top economic policy makers is to “make the economy more competitive” and to “try to eliminate the deficit” in the budget by not seeking to borrow abroad, which will only compound matters. “2 percentage points of extra growth, for example, could generate an additional 7 million guilders in St. Maarten.”

The island should continue to bolster its tourism product, which accounts for 72% of the island’s foreign exchange alone. But it should also provide incentives for further economic diversification, and, most interestingly, to encourage more bunkering of fuel, the president advised. That’s because the local yachting industry has played a significant role in the growth of St. Maarten’s fuel bunkering sector, and, under the right policy direction, will continue to play an increasing role in economic growth.

For a more detailed reading of Tromp’s report, see related story on page 5.