The concept of a youth detention facility that Justice Minister Dennis Richardson envisions sounds like the plan St. Maarten has been waiting for. The minister's approach could create a temporary solution in the mid-term and afterwards create addi

Justice Minister Dennis Richardson made a remarkable observation in the interview we publish today: corruption in the Netherlands is not the same as (what is perceived as) corruption in St. Maarten. With close to 17 million inhabitants, the Nether

The tart and candy makers were presented with plaques in recognition of their exceptional work yesterday at the Bastille Day celebrations. Photo Today/Andrew BishopMARIGOT, St. Martin – It was a time for reflection as the Collectivite of St. Ma

Justice Minister Dennis Richardson, in front of a painting by Ras Mosera, envisions a three-level facility for youth detention - from closed, to half open to entirely open. Photo Today / Hilbert HaarSt. Maarten - By Hilbert Haar - When the country c

St. Maarten – Prime Minister Sarah Wescot –Williams has further explained the serious indications of corruption at the National Security Department (VDSM) on Friday. The prime minister gave clarity on the status of the VDSM and the progress of 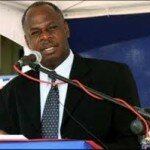 MARIGOT, St. Martin – The same governing program that was prepared by the combined parties in the Triple R Group is continued by the Collectivite, said Vice President Guillaume Arnel. “The only thing that has changed since the former President

St. Maarten – Prime Minister Sarah Wescot-Williams gave an update on the budget on her weekly call-in radio program One on One with the Prime Minister on Pearl 98.1 FM on Friday. She stated that for the last few weeks as the new government one o

St. Maarten – Within 25 minutes, two robberies took place on Saturday evening where two victims were robbed of their belongings. The first robbery occurred around 9.30 p.m. in the vicinity of Island Water World on Water Front Road where two men

The Council of Advice has published its own code of conduct. This is a noteworthy initiative; not because the code contains any real surprises, but because this shows the council's commitment to transparency and independence. Years ago, when St. M

Kingdom Relations Minister Plasterk seems to have to yardsticks: one for St. Maarten and Curacao, and one for the Dutch public entities Bonaire, Saba and Statia. While Bonaire is engaged in a political controversy that makes St. Maarten look like

Ahead Center of Excellence closed its doors

St. Maarten - After a yearlong struggle to keep its program afloat, the Ahead Center of Excellence has officially closed its doors. Last week the institution, which addresses the unique learning disabilities children face, particularly autistic child

St. Maarten - The court in Philipsburg handled 4,331 cases in 2012, a slight increase of 2.1 percent compared to the 4,242 it handled in 2011. This appears from the annual report of the Common Court of Justice that belatedly arrived yesterday. Ove

Plasterk not concerned about political crisis in Bonaire

THE HAGUE - Kingdom Relations Minister Ronald Plasterk does not consider the political crisis in Bonaire a controversial issue, Jamila Baaziz reports on Caribisch Netwerk. From a letter to the Second Chamber, it appears that he shrugs off the reports

St. Maarten – Seven candidates received their certificate in advanced financial investigation from the head of the Detective Department, Commissioner Denise Jacobs, on 5 June. One of candidates was from the federal detectives and the other six came

St. Maarten – Persons making their way to the St. Maarten Medical, the St. Maarten Laboratory services or the Mental Health Foundation will be able to access transportation at the intersection of the Welgelegen Road at the vicinity of the Teke Teke

St. Maarten – A woman was killed in the Pelican Key area yesterday in a serious car accident at around 2:15pm. The central police dispatch received a call informing them that a female driver was stuck under the vehicle and was not showing any signs