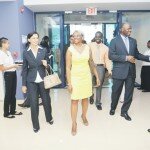 Prime Minister Sarah Wescot-Williams, First lady Marie Louise Holiday and Governor Eugene Holiday are greeted by Assistant Managing Director of WIB Kelvin Bloyden shortly after the ribbon cutting ceremony in the lobby of the main entrance to the buil

If it was not clear yet, it must be clear now: the Netherlands will not meddle in political developments in St. Maarten. It will not dive into questions about the disputed integrity of candidate-ministers and it will also not interfere in any way in

St. Maarten – $5000 will be rewarded for the information directly leading to arrests of the three escapees and to the arrest and conviction of those who helped them, acting Attorney General Taco Stein stated in a press release. The public is ask

GREAT BAY – St. Maarten will have to make additional efforts in the fight against money laundering and financial fraud, the Public Prosecutor’s Office writes in its annual plan for 2014. The Caribbean Financial Actions Task force evaluated St. Ma

Minister Plasterk: “Screening is a matter for St. Maarten”

St. Maarten – Kingdom Relations Minister Ronald Plasterk says that the screening of candidate-ministers “is a matter for country St. Maarten that is regulated in the national ordinance Promotion Integrity of Ministers.” The Netherlands is not i

St. Maarten – The Public Prosecutor’s Office wants to focus in 2014 on supporting crime-victims and on JASAP: Justice As Soon As possible. Departing Chief Prosecutor Hans Mos writes this in the introduction of his office’s annual plan for next

St. Maarten - Finance Minister Martinus Hassink will be preparing a vision document regarding the budgetary procedures and measures for the Council of Ministers handling next Tuesday. The new minister has already prepared a document outlining the

St. Maarten - While speculation remains rife in the community that the candidate minister for the Ministry of  Tourism, Economic Affairs, Aviation, Transportation and Telecommunication will be coming from neighboring island, Curacao, Prime Minister

Slap on the wrist for filing false complaint

St. Maarten – The Court in First Instance sentenced a 53-year-old woman yesterday to a 4-week conditional prison sentence and 2 years of probation for filing a false complaint against her alcoholic and abusive husband on August 7 of last year. The

St. Maarten – The Department of Statistics (Stat) issued its preliminary results of economic developments yesterday, as measured by the Gross Domestic Product (GDP) by production and expenditure and real growth. According to provisional figures

St. Maarten -  The Windward Islands Federation for Labor (Wifol) plans to challenge a dismissal request for 4 Laundromat employees that have been submitted to the Labor Department.  In speaking of the employees’ plight, union President Theophilus

GREAT BAY-The St. Maarten Development Fund has acquired a small advance payment from the government as it awaits its budgetary allocation for 2013. The money is to assist the fund in its operations and also ensure that payments are made to foundation

St. Maarten – The Windward Islands Federation of Labor (Wifol) is continuing to register concerns from workers who say they are being treated unjustly by the employment agencies that they fall under. On Tuesday, union President Theophilus Thompson