St. Maarten – “When on May 6 the majority in parliament submitted a new proposal for working together, one of the first items arrived at was to come with an action plan for the essential items that need to be handled in the interest of the people

St. Maarten – Over 200 marijuana plants were confiscated by police officers and members of the VKS during a large drug operation on Saturday morning in the hills of Margareth Bruce’s Drive in Middle Region. Searches of the area led the investi

St. Maarten – Following the recent high-powered Dutch trade mission to Brazil and the subsequent announcement by Aruba of an upcoming air bridge between São Paulo and Aruba, the cabinet of St. Maarten’s Minister Plenipotentiary in The Hague has

St. Maarten/THE HAGUE – Now that the candidates for the new ministry of St. Maarten are announced, Member of Parliament of the Second Chamber in The Hague André Bosman (VVD) immediately asked questions to Kingdom Relations Minister Ronald Plasterk

St. Maarten – The consumer price index for St. Maarten has increased in April by 0.5 percent compared to that of February. When comparing average consumer prices over a 12 month period, April 2012 to April 2013, an increase of 2.9 percent was re

St. Maarten – The Public Health Inspectorate plans to take its case to the Court of Appeals and contest the decision of the Court of First Instance in favor of the St. Maarten Medical Centre (SMMC). Yesterday, Inspector General Dr. Earl Best issu 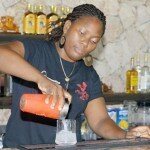 Witter, in the process of mixing a Rum Collins during the finals which took place at the Point Bar, in Maho.St. Maarten -  Three months of hard work concluded with a mix off between three bartenders at the Point Bar, located on the premises of t

St. Maarten – The visit of the U.S. Coast Guard Tall Ship Eagle’s visit has been considered a success.  The open house attracted many visitors on Saturday despite the overcast conditions on that day.  There was a lot of interests and enthusiasm

Duncan responds to accusations on controls

St. Maarten – A plenary public session of parliament regarding the position of the chairman that was scheduled for Monday has been cancelled by the Vice Chairman of Parliament Romain Laville. The agenda point was handled in the plenary session o

St. Maarten – In a shooting Friday night at approximately 2 am at the parking lot of the Caravanserai hotel near Bliss nightclub, where at least one man got injured and another man is still missing. According to police spokesman Richardo Henson,