St. Maarten – A 17-year-old girl identified as D.A.B. stabbed 20-year-old Kimberly S. Illidge to death during a fight in Middle Region on Saturday evening. The stabbing occurred shortly after 9 p.m. on Valley Drive. The reason for the fight is uncl 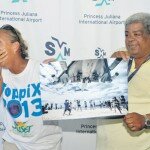 St. Maarten - Alain Duzant had two of the six images that was nominated by the judges, but it was a photo from Bernie Verhoeven that produced the wow factor; a KLM B747 arriving over the beach at the foot of the runway, was enough for her to walk a 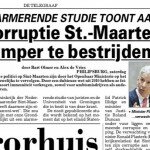 Telegraaf reports: St. Maarten has its own Berlusconi-law (Immunity for politicians)

St. Maarten – The national ordinance that regulates the prosecution of politicians has come anew under scrutiny after a publication in the Telegraaf on Saturday. Under the headline: "Alarming study shows: corruption in St. Maarten hardly possi

Competition authority in the making for St. Maarten

St. Maarten – Based on the outcome of a feasibility study the Ministry of Tourism, Economic Affairs, Transportation and Telecommunications has commissioned the Social Economic Research Institute SEO affiliated with the University of Amsterdam to de

St. Maarten – The United People’s party faction reacted outraged yesterday morning when Parliament President drs. Rodolphe Samuel adjourned a meeting that was scheduled to begin at 10 a.m. without much further ado for one hour due to “unexpecte

St. Maarten –Officers of the National Detective Agency interviewed Minister of Economic Affairs Romeo Pantophlet for four hours yesterday afternoon. The minister was heard as a witness in the Bada Bing bribery scandal. The Public Prosecutor’s

St. Maarten – The Foundation for the promotion of the interests of the Pelican Resort and Club has filed a lawsuit against Quantum Investment Trust, the Simpson Bay Resort Owner Company NV and notary Henry Parisius. The foundation asks the court to

St. Maarten - Minister of Tourism, Economic Affairs, Telecommunications and Transport Romeo Pantophlet has expressed his gratitude to all those who contributed to making the stay and shuttling of stranded Carnival Dream passengers, here last week, a

St. Maarten - Last week the government approved more than 1 million guilders in payments that needed to be made as a follow up to the completion of works for the new government administration building. “Another amount of over 1 million dollars t

St. Maarten - Unlike previous shows when patrons enter the Festival Village and just gyrate a little while the entertainers perform on stage, ‘Xtratight’ Entertainment will be seeking to take the partying to another level during a dance which is

St. Maarten – On Wednesday afternoon a Jet Ski with a three persons on it suddenly burst into flames in the waters of Great Bay. Around 2.50 p.m. the police patrol was directed to the Boardwalk in the area of the Fire House Restaurant where a mo

St. Maarten – A young man with the initials R.R. had been stabbed around 8.30 p.m. by an unknown man at the Melfor Hazel Sports Complex on Wednesday. The victim, a minor living at Over The Bank, reported that while he was walking on the Soaliga

St. Maarten – New firearms for the Ministry of Justice that was advised by the Committee for New Police Weapons (CNV), in which Commissioner of Police Carl John represents the police, was presented to Minister of Justice, Roland Duncan yesterday.

St. Maarten - It came as no surprise when the majority of people who attended the 5th Annual Lions Rudy Hoeve Health and Wellness Fair flocked the booths that were offering free testing services. Those who did not have the time nor the resources to v

St. Maarten – Prime Minister Sarah Wescot-Williams expressed her condolences to the family and friends of the late Antillean Statesman, Member of the PAR party and former Prime Minister of the Netherlands Antilles Miguel Pourier. “I have had the