St. Maarten - Chief executive officer of the Harbor Group of Companies, Mark Mingo reiterated his concerns that other government-owned companies are not paying concessions or dividends to their main shareholder, the government. Mingo told a Central C

St. Maarten - It may cost 25 million guilders for Pier 2 to be expanded but the Harbor Group of Companies sees it as the only alternative to the challenges that St. Maarten is facing from its neighbors. Chief executive officer Mark Mingo gave info

President Richardson: We are on the right track” Collectivité tackles tax compliance

MARIGOT, St. Martin – Finance Minister Roland Tuitt is not the only one to address tax compliance. Alain Richardson, like Tuitt a certified public accountant, and nowadays the President of the Collectivité d’Outre Mer de Saint Martin (COM) is ba

St. Maarten – P.W., the boyfriend of missing Jamaican Annmarie Lynch was out in immigration detention on Monday after the Judge of Instruction on Friday turned down a demand by the Public Prosecutor’s Office to prolong the man’s custody with ei

What is it with our town centers that they just do not flourish after sunset? In Philipsburg the explanation seems rather simple. Front Street is crammed with jewelry stores and these retailers go home at the beginning of the evening. Same for Back S

Big Tobacco has had a bad name for a long time, but now it has company of, one could say, Big Food and Big Alcohol. The three sectors use the same tactics and strategies to undermine public health – at least such is the conclusion from a global ana

Not all the time many words are needed to get a point across. So, this time a short article from our side. Actions speak sometimes louder than words. We all know the example of the twig that can easily be snapped once alone, but which is hard to bre

The frustration of harbor Chief Mark Mingo is understandable. While the port pays at least a concession fee to the government, other government-owned companies keep their money in their accounts. The airport just refinanced its debts with a bond i

St. Maarten – Colombian consular services will be provided to St. Maarten this week, on the occasion of a visit by Colombia’s Consul-general in Curacao, Dr. Alfonso de Jesus Velez Rivas. The Colombian diplomat is assisted by Gloria Leon Lulu (Ass

SER and Minister of Finance discuss Cola and tax reform

St. Maarten -  A Social Economic Council (SER) delegation discussed a number of key policy issues on Friday with Finance Minister Roland Tuitt and several staff members. In line with the intention of the SER to anticipate advice requests from govern

Librarian honored for 35 years of service

St. Maarten - The Philipsburg Jubilee Library (PJL) honored staffer Irmin Hughes-Richards for her 35 years of dedicated service to the people of St. Maarten. “Earnest dedication, selfless devotion and utter commitment to her work are only a few 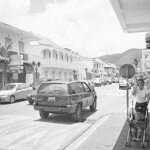 MARIGOT, St. Martin – The Collectivité d’Outre Mer de Saint Martin (COM) will invest between €5 and €6 million ($6.75 to $8.1 million) in the revival of the center of Marigot. “Marigot is a priority for the Collectivité,” the governm

St. Maarten – Anthony Ray Spencer was put in immigration detention after the Common Court of Justice acquitted him last week Wednesday of the murder on Christian Lloyd in January 2010. Spencer, 43, was serving a 20-year sentence for the murder. He

Sister Regina pupils get a taste of marine sector

Mingo: Causeway adjustment cost will not be significant – funds from Union Road upgrade taken back-

St. Maarten - The Causeway project across the Simpson Bay Lagoon will go ahead with structural adjustments and chief executive officer of the Harbour Group of Companies Mark Mingo says that the initial construction which breached civil aviation stand

St. Maarten - The members of the Dominican community living on St Maarten will be joining their fellow nationals all over the globe when the Dominican Republic celebrate their 169th  anniversary celebrations and a series of activities has already st

From left to right: The inspectors together with Acting Secretary General of Ministry VROMI Louis Brown (2nd from left) and Minister of Justice Roland Duncan (6th from left). Photo DCOMMSt. Maarten – Seven civil servants of the Ministry of Vrom

Jacobs: ‘Upgrade is a priority’

St. Maarten – Minister of Sports Silveria Jacobs says it is a priority for her to see the Raoul Illidge Sports Complex (RISC) and Little League Ballpark upgraded. Department of New Projects Development and Planning has been working diligently an

Dozens of kids benefit from special classes in Marigot

MARIGOT, St. Martin – The Collectivité d’Outre Mer de Saint Martin supports students who have a disability with specialized auxiliaries that work in the schools to facilitate the life of these students. All together, 167 children benefit from th

St. Maarten – The Junior Chamber International (JCI), recently elected and installed its new Board of directors. During the concluded elections, President, Meandra Hazel, welcomed the newest board members to the executive wing of the non-profit

St. Maarten – In The Hague, a majority of MPs voted for a motion to reintroduce a complete smoking ban in bars, restaurants and cafes. This outcome developed a huge dissatisfaction throughout the Netherlands yesterday afternoon. The ban was brou

St. Maarten – At Valentine’s Day, the CIBC FirstCaribbean will give its costumers all across the region an unforgettable Valentine’s Day gift this Thursday. Managing Director, Customer Service Management & Strategy, Trevor Torzsas, has a

WILLEMSTAD, Curacao - The Health Inspection has recently stumbled upon a case where a medical specialist exceeded the limits of his professional domain. In other words, this medical specialist has carried out medical operations on the field of anothe