Uncategorized - Posted by admin on October 9, 2012

St. Maarten - The central committee meeting called by the United People’s party (UP) faction on September 26 for education minister to explain her present educational policy and the policy on youth and sports ended with more questions than answers

GREAT BAY- The St. Maarten Nature Foundation in cooperation and advised by a group of concerned citizen fishermen has proposed various economic alternatives to the filling in of the Great Salt Pond. “We are hereby approaching the various stakeho

St. Maarten – The Mary’s Fancy Home Owners Association has urged the Council of Ministers to take appropriate measures towards the removal of illegally dumped sand in the Great Salt Pond and to restore the affected areas. The association objects

St. Maarten – The third suspect in the Michael and Thelma King murder, 20-year- old J.J.W. is cooperating with investigators and has made a statement, the prosecutor’s office said in a press release issued last night. The Judge of Instruction app

iPad-3 winner Debra Tackling, shown here with her family, received her price from Burger King Cole Bay manager Francisca Joseph.St. Maarten – Debra Tackling became the third winner of an iPad-3 at Burger King this year. At the draw at the end of Se

It is by now abundantly clear that there is no support for dumping more sand in the embattled Great Salt Pond- not for a cricket stadium and not for an extremely noisy drag racing strip. The thing to do is obviously to pull the plug on these projec

St. Maarten - Barely two years old, the St.Maarten Senior Citizens and Pensioners Association (SMSPA) has been a dominant voice in championing the rights of the elderly and aligning itself with other grassroots organizations for social development on

Some people think about food all day long. I remember a colleague who would walk into the office at ten in the morning complaining about what he called hunger pains – and he certainly did not look like an underfed puppy. In another category of peop

Versgeperst.com gauged the sentiment in Willemstad following all the political brouhaha in the country that now has an interim-cabinet, nine MPs that pretend they still are the parliament but are unable to hold meetings because they never have a quor 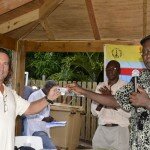 Roderick Halley receives his ID card from Leopold JamesMARIGOT, St. Martin -Roderick Halley and Maria Chemont received their cultural identification cards for their contributions as St. Martiners to the community by the coordinator of the St. Martin

St. Maarten – In the beginning of August, attorney mr. Geert Hatzmann filed a request with the Common Court of Justice on behalf of Judella Heyliger to order the prosecution of someone who defrauded his client out of $4,000. Last week Thursday the

St. Maarten(DCOMM) – Health authorities throughout the Americas recently approved a new strategy that seeks a 25 per cent reduction by 2025 in deaths from non communicable diseases like cardiovascular disease, cancer, diabetes, and chronic respirat