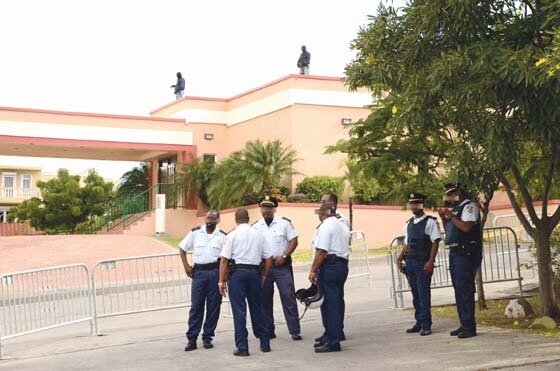 Two members of the arrest team are on the roof of the Belair Community Center, while colleagues on the ground gather in the shade of a tree. Photo Today / Leo Brown

St. Maarten – The stage was set for the first day of the Vesuvius trial at the Belair Community Center yesterday morning. Fifty police officers were on the scene to guarantee maximum security but in the end the seven suspects did not even show up: they stayed in the Pointe Blanche prison, and only three attorneys made an appearance. Within an hour after the court session opened at nine o’clock, everybody went on his way.

The community center was under heavy security. Crime scene tape and steel barriers marked the entrance to a side door of the building. On the roof, four members of the arrest team, clad in bullet proof vests and balaclavas, sported automatic weapons. On the ground, police officers milled around, waiting for something that would not happen: the arrival of the seven suspects.

At the last moment somebody arrived on a scooter carrying a white plastic bag; that turned out to contain a portrait of H.M. Queen Beatrix – an obligatory ornament for any courtroom in the Kingdom.

Inside the community center the stage was obscured by white panels; in the center hung the queen’s portrait and in front of it was Judge Smid. The area for the suspects that did not come was separated from the rest of the hall with steel barriers. The hundred-odd chairs set up for the public remained mainly empty.

The attorneys made their last requests for additional information and investigation known to the court, and that was it: within an hour, Judge Smid announced: “That was it for today.”

The realm court case will begin in two weeks, on Monday October 15 and then the defendants and all their attorneys will be there.

The Vesuvius-investigation takes the April 16, 2011 murder of Amador Jones as its starting point. One of Jones’ friends told investigators that day: “Oggie got killed and nothing came out of it. Now it is Amador. You all better find this man. If not, we will take care of it ourselves.”

That is of course exactly what happened. Oggie is Eduardo Oggie Gumbs, who was sentenced to 13 years for a 2001 murder. When he came out of prison, he was soon shot to death on September 20, 2010.

The Amador Jones murder is the result of a struggle between two drug gangs for control of the local market. After Jones stole ten bricks of cocaine from a shipment belonging to Hector Miguel Arrindell, the latter retaliated with murder. Organized by Eric Lake and Brian Cristina, Omax Bye is the man who pulled the trigger on Jones.

The murder is followed by shooting in Dutch Quarter whereby Kennedy Fergus gets hit, but the real target, Omax Bye, escapes. The shooter, prosecutors have alleged in court, was Omar J.

On May 25, Hector Miguel Arrindell was shot to death; on July 7 his brother Rodolfo fell to bullets; on August 17 Eric Lake and Kevin Gumbs were the next two in line. There are indications that the murder of Sheldon Thomas (shot to death on the Cakehouse road on August 19) and Anthony Whyte (killed in his home in Dutch Quarter on September 18) are also part of the criminal vendetta.

During the investigation 17 firearms and more than 600 rounds of ammunition were confiscated, together with almost $25,000 in cash.