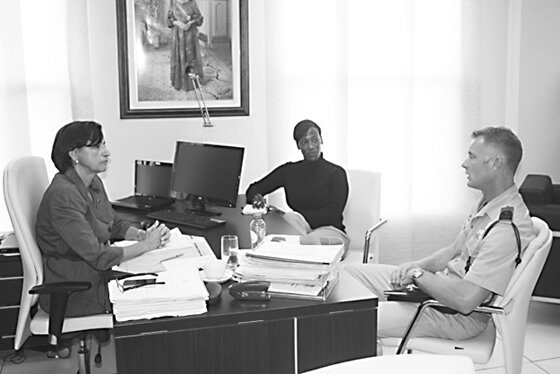 St. Maarten – Prime Minister Sarah Wescot-Williams was briefed yesterday by Brigadier Edwin Hofma, the commanding officer of the marine base Savaneta in Aruba about future plans to establish a permanent marine facility on St. Maarten.

Hofma, who is the chairman of the workgroup for the future establishment of a marine base on the island, explained the progress thus far. Once established, the marine base will provide military assistance, logistical assistance to the VKS and to the community in general. Also discussed was a social formation program similar to that on Aruba especially for the at-risk youth on St. Maarten.
The base in Aruba conducts an active program for at-risk youth where Marines offer discipline training.

The prime minister was very pleased to hear about the prospects for a base on St. Maarten as well as the plans Brigadier Hofma outlined for the community in general. The marine base, which is expected to be finalized in 2013, will be further discussed during the visit by Kingdom Minister of Defense Hans Hillen next week.