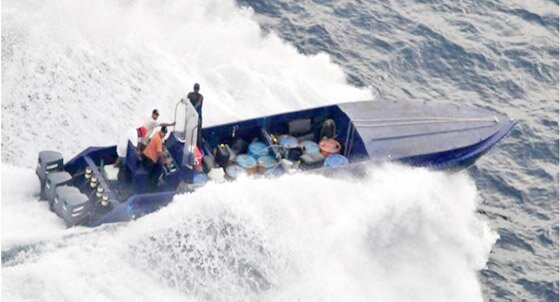 Curacao- In an ambitious effort led by the Dutch Navy ship HNLMS Tromp, Dutch navy and Coast Guard units prevented drug runners from transporting 2.000 kilograms of narcotics on the open sea. The Tromp’s actions took place near the end of June and were in concert with the international operation Martillo aimed against the illicit drug trade. Ongoing investigation into this recent action prevented information to be been released earlier.

When a go fast speed boat sailing at high speed was detected near Colombia, the operation center at the Parera naval base in Curaçao launched an immediate and extensive search. HNLMS Tromp with its Belgian Alouette helicopter was directed towards the scene, as was the Dash-8 maritime patrol aircraft of the Dutch Caribbean Coast Guard. After an intensive search the boat was located and a pursuit followed. The drug runners ditched the contraband. The American law enforcement team aboard the Tromp confirmed the amount of drugs that was found.

The four crew members of the boat were arrested.

Brigadier General Swijgman, Commander Netherlands Forces and Director Dutch Caribbean Coast Guard expressed his satisfaction with the result. “International effort made this possible. The Dutch Navy and Dutch Caribbean Coast Guard together with its international partners have shown to be one team with a shared intent to stop organised crime in the Caribbean area. That is the key to success.”

The Dutch Navy and Dutch Caribbean Coast Guard are an integral part of the international struggle against the illicit drug trade. Operation Martillo is a multinational collaborative effort to counter the spread of transnational organised crime in Central America. The operation is lead by the Joint Interagency Task Force South in Key West, Florida and denies organised crime networks the ability to conduct illicit trafficking via air and at sea. The Commander Netherlands Forces in the Caribbean is part of the Joint Interagency Task Force South, as the subordinate commander of Task Group 4.4.