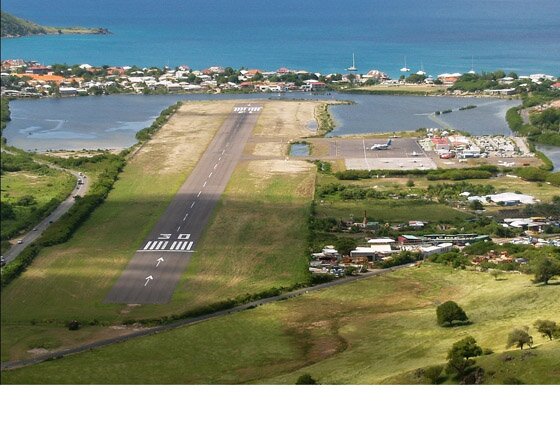 GRAND CASE, St. Martin – The expansion of the Grand Case airport in L’Esperance is expected to begin by the end of this year, but so far no contact has been made with Rex Allen Lawrence who owns the property the Collectivité needs to realize the project. “Up to now no one has contacted us about it,” Lawrence – the sole owner of the land that lies in the path of the expansion – says.
Lawrence said that his siblings own property in the area that is not directly in the path of the projected runway extension. “I heard that the land for the expansion will cost a fortune. It is not correct to say things like this when no one has approached me about selling the land.” No one from the Central Government or the Collectivité has approached Lawrence thus far.
The land owner said that, “People are only chatting about the project.” He is unable to say how much land is required for the expansion project. “No one has come with a plan and I have no plans to approach the representatives of the Collectivité.”
“We are not against government with what they intend to do but they cannot come with anything and expect it to be done today for tomorrow, because they feel there is need to negotiate about this property,” Lawrence said. He learned that the land has to be turned over to the company that now runs the airport and noted that if there is a deal it will take months to negotiate because there is also the issue of tenants that have been renting for more than 20 years.
“If the land is needed then my tenants will have to find some place to move before the project gets started,” said Lawrence. He plans to continue with his work on the property until he is approached by representatives of the Collectivité.
Lawrence already gave the government pieces of land for development, including a portion of the roundabout in Grand Case.

Leave a Reply to Dave