Athletes return from France with gold and silver medals 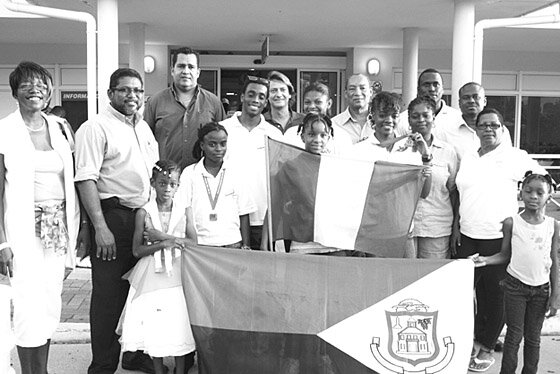 President of the Collectivité Alain Richardson (second left) poses with the Speedy Plus delegation after they arrived at the Grand Case Airport.

GRAND CASE, St. Martin – Several athletes who represented St. Martin in the recently held athletic meet in France has returned to the island sporting gold and silver medals. President and coach of Speedy Plus Calvin Bryan in his comments on the games said that the group had to stay in France for some time because he wanted the team to train because “if we stay in St. Martin the athletic will be up and down and anything could happen.”

The athletes were praised for their performance. The teams from Guadeloupe, Martinique and French Guiana, which were much larger, took time out to congratulate the athletes from St. Martin for their excellent performance.

“We had only one team while all the clubs in Martinique and Guadeloupe had several teams who participated in the games but we had better results than them. I am very proud of the kids and all we need is the financial support so as to move forward. He noted that if the outer members of the team worked harder they will always have excellent results,” Bryan said.

“We worked hard in for these races which resulted in our victory,” she said.

Athletes from Speedy Plus pose with their medals shortly after their arrival.

She mentioned that this is not the end and intend to work harder so as to bring in more medals in their quest in representing St. Martin/St. Maarten.

President of the Collectivité Alain Richardson told the athletes they have made St. Martin proud with their excellent performance and mentioned that this is not something that started this year but was demonstrated over the years. He recalled that on Bastille’s Day which is celebrated on July 14 the theme for the celebrations was “Youth and Excellence.” He also noted that even though part of the team is still overseas they have the youth and the excellence of their performance.

“I really wanted to be here to congratulate them personally on behalf of the entire population of St. Martin,” Richardson said.

The president stated that in the past there was only negative news of St. Martin in the French media houses where there was reports of drugs or violence.

Richardson told the group they have set the bar high for the others to follow. He is convinced that they have the talent and the competence especially those who are willing.

“It is important that once the government has cleared their financial burdens  that we really invest in infrastructure and to the men and women who are working in these disciplines so that this will not be an exceptional situation but a permanent one for the territory.”