Meyers-Olivacce: “Give Jack his jacket and recognize this fact” – UP claims credit for budget approval


St. Maarten – The United People’s party claimed credit for the approval of the 2012 budget by financial supervisor Cft in a statement issued by interim faction leader Sylvia Meyers-Olivacce that touted the achievements of ousted finance Minister Hiro Shigemoto.
“The fact that the government got a clean report from the Cft on the budget amendment, speaks volumes for the hard work of the Ministry of Finance under the former Minister of Finance Hon. Hiro Shigemoto. It means that some of the concerns addressed in the budget amendment the ministry was already working on for some time before the new administration took over,” Meyers-Olivacce stated. 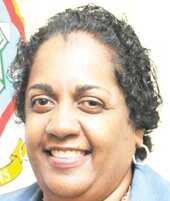 “One must also remember that the UP led Government worked diligently from day one after achieving country status to build up the Ministry of Finance during a period of 18 months. The groundwork was done under the UP and a solid foundation was laid under the UP including the opening of a Cft liaison office in Philipsburg that would further facilitate the communication process with the Ministry of Finance.”

Meyers-Olivacce added that the outline for the budget 2013 was issued to the ministries before the former government left office. “This also means that progress has been made since the grading of the financial management by means of the Performance Evaluation Financial accountability (P.E.F.A.). Also this plan was in progress before the former administration left office May 21, 2012. The current Minister of Finance is enjoying the hard work that was carried out by the UP Government and he should give jack his jacket and recognize this fact.”
(Pefa actually stands for Public Expenditures and Financial Accountability – ed.)

The UP interim faction leader also claims that the ideas for a simpler tax system again were the work of Shigemoto. “Lower income and profit tax rates, gradual shift from direct to indirect taxes with a re-structuring of the current turnover tax, ordinance to remove the repetitive moments of taxation in the chain of transactions. Other revenue generating proposals were also launched such as a fee on alcohol and tobacco and maintaining the competitive price within the region. Also synchronization with the French government as it pertains to the new tax code. Regional comparisons were also made in order to ensure that our country does not tax itself out of the market and remain uncompetitive in the region.”

Meyers-Olivacce mentions staff changes as a new challenge in her press release. “With the resignation of the acting head of Fiscal Affairs per August 2012 where does this place the timeline for the introduction of the new tax code? Will January 1, 2014 still be attainable? What relief will the government come with in the interim? Will the social partners such as the SHTA, Chamber of Commerce, the real estate sector, and the Foundation Tax Committee be involved as was the case with the previous UP-led government? What can the people expect in relief before January 1, 2014?”

As it pertains to the outstanding for creditors of the Government, the Finance Ministry together with the former UP Minister of Finance was working on this prior to the resignation of the UP-led Government, Meyers-Olivacce claims. “As a matter of fact the ministry was preparing the advice for the former Minister to deal with those accounts which the ministry felt could be written off following established procedures and laws. It is of course a dynamic process and the outstanding amount goes back many years prior to the former government’s term. And this process will have to continue even after the current government’s term.
What needs to be established is what this government will be doing to ease the burden on the regular man on the street. What are the projections for the slow months of August through October to stimulate the economy?”