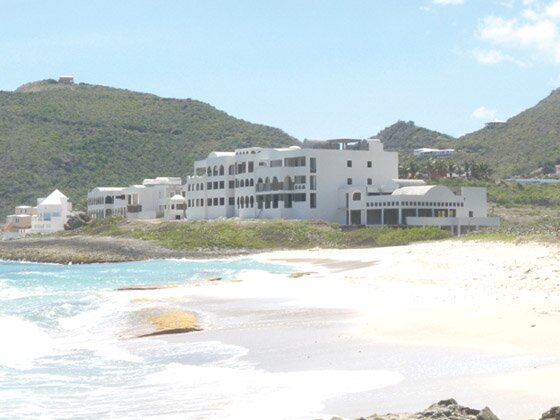 The Aquarius Development on Red Pond will be auctioned today.

St. Maarten – The developers of the Aquarius development at Red Pond laid out the reasoning on Wednesday for the property and buildings ending up on the auction block. Simply put, they could no longer afford to pump their own money into a development.
“The beautiful Aquarius development on Red Pond unfortunately has come to a close. To those wonderful, supportive buyers, who were an integral part of the development, the Aquarius developers remain grateful to you for helping to support the development in very difficult economic times. For those buyers who could no longer manage their contractual payment schedule for work complete, due to their own economic hardships, the developers of Aquarius sympathize with your personal crisis and hope for your personal financial recoveries,” a release from Aquarius Co. Ltd states.
Later the company’s spokesperson Johnny Erato added, “Roughly 66 percent – more than half – of the buyers defaulted on their payments. The developers work with people paying. If people don’t pay then we stop working. The developers have tried everything. They didn’t want to see it fail and they even invested their own money.” According to a statement the developers received a total of $12, 555, 762.50 in capital for the project. Some $8, 155, 762.50 came directly from buyers who want to have a vacation home at the development and the remaining $4.4 million is a bank loan the developers took to finance the land purchase. When the developer calculates the difference between all sums paid by all Aquarius buyers – solvent and insolvent – and the average appraised value for construction and land – $17, 650, 000 – they note a difference of $5, 094, 237.50. The average appraised value is based on appraisal report done by Independent Consulting Engineers ($19, 150, 000) and one finalized in June, 2012 that was done by David Morrison and Associates ($16, 150,000).
“The vast difference between the total funds received from all Aquarius buyers and current value came from the Developer with hope to save the development until the dominant U.S. economy turned around. This further demonstrates that the Aquarius developers themselves invested more than 50 percent of all buyers funds received to date. Unfortunately the sagging U.S. economy still lingers and the dream of a beautiful vacation home on St. Maarten at the Aquarius development became far less important to those hurting families who had to prioritize the use of their funds back home. However the fact remains that “All Buyers Funds” went into the development plus a great deal of the developer’s funds,” the Aquarius Co. Ltd release states.