“We need to be prepared” St. Maarten and St Eustatius in joint trafficking training 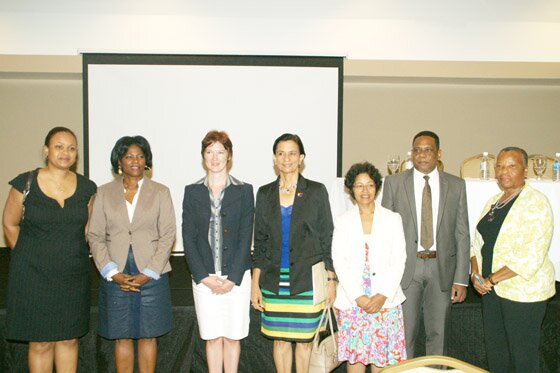 GREAT BAY – Ensuring that St. Maarten – “much like a good boy scout” – is professionally prepared for any situation involving vulnerable migrants like asylum seekers, refugees, victims of trafficking and children is the main focus of the five day workshop that began Divi Little Bay on Monday. The training, which will cover international best practices and allow participants to get technical knowledge, skills and tools to identify and protect vulnerable migrants, is a joint effort of the Anti-Trafficking in Persons Foundation Windward Islands (Atip), the International Organization on Migration and the United Nations High Commission on Refugees. The participants include senior officers of law enforcement, Red Cross and people from medical field from St. Maarten and St. Eustatius.
“While it may be argued, and argued quite correctly, that there is no army of vulnerable migrants in this neck of the woods here on St. Maarten, Saba and St. Eustatius, we are all familiar with the fact that our islands, especially St. Maarten, play host to a relatively large migrant population, many of whose members continue to live here under the radar as undocumented persons who run the risks of being classified at some stage as vulnerable migrants. It is also known that these islands are seen as strategic outposts or links in the trafficking of migrants. We are also no doubt very aware that given the location of these islands and the political, economic realities of this region in today’s world, there is always a strong likelihood that on any given day and without any notice a contingent, if not an army, of vulnerable migrants can turn up on our shores,” Atip President Cassilda van der Neut said.
Later she’d add, “The only point I seek to make here is that we in the Windward Islands – like good boy scouts – need to be prepared for any such situation. We need to be prepared to deal professionally with any such situation within the scope of our laws and our human and other resources and in keeping with our national, international and humanitarian obligations. This is an opportune time to strengthen institutional capacity given St. Maarten’s changed status since 10-10-10 and its successes to date in confronting the issues of human trafficking. A struggle in which Atip, with the help of IOM and governments within the Kingdom has been playing a role, which reminds me that we at Atip are surprised and are still, wondering why neither our role and St. Maarten’s efforts were not recognized in the recent global Tip report issued by the United States State Department.”
“We strongly believe that this session will make a lasting contribution to St. Maarten and St. Eustatius’ effort in addressing the complex challenges of protecting vulnerable migrants and in furthering cooperation with others in a search for practical and durable responses,” the Atip president concluded.

Participants in the five day workshop on human trafficking organized by the Anti-Trafficking in Persons Foundation Windward Islands (Atip), the International Organization on Migration and the United Nations High Commission on Refugees stand together with their trainers for a family photo on day one of the training. (Pearl 98.1 photo)

Facilitators
Project Manager at the IOM’s office in Port of Spain Chissey Meuller and Regional Protection Officer Iris Blom, who works out the of the UNHCR office in Washington, D.C. will be the facilitators for the training. They are both pleased that the government has accepted the offer to have a workshop here and for making key personnel available to participate.
“This week will be intense and we will cover quite a bit of ground. St. Maarten is a mixed migrant place. You have many different kinds of people here, many are doing well and they’re living happily ever after and there are a few who may not be doing so well and those are the few that we’re targeting in the workshop in the five days. It’s up to you to determine what works for you in your context. Each country is a little different. It’s great to create the opportunity and that your government has accepted it and enabled you to be here for the next five days,” Meuller said.
Blom announced up front that the UNHCR is prepared to provide the country with technical support and training for staffers who deal with asylum seekers and refugees. She highlighted one particular part of the training that makes good on that commitment during this week.
“One of the things we will discuss in this training is Refugee Status Determination – interviewing techniques, country of origin information and of course we will exchange views and have a frank and open dialog on how we can best serve persons in need of international protection,” Blom said.
Support
The five day training is “in line” with a Memorandum of Understanding the Justice Minister Roland Duncan signed with his colleague ministers of justice of the Netherlands, Curacao and Aruba in June 2011.
“A number of specific action points were agreed to in the Memorandum of Understanding such as the appointment of a country coordinator for human smuggling and human trade, joint controls of law enforcement agencies, exchange of information between law enforcement agencies and yes training of law enforcement officers was one of the actions as well. So this training fits within the framework of the MOU and the policy of the minister of justice. The minister granted full time to participate. Apply what is learned here in the execution of your profession,” Head of the Department of Immigration and Naturalization Udo Aron said.
Senior Justice Ministry staffer Irene Simmons made the subject personal by saying that any person could become a trafficking victim because it always begins with deceit and that gets bigger.
“Unlike human smuggling, in the case of human trafficking, sometimes it starts with some kind of deceit that ends up in forced slavery, forced labor and situations associated with that. Because of the financial gain of those involved – the traffickers – it is difficult to stop it and it requires constant, proactive efforts of those involved in combating it and keeping it under control,” Simmons said.
Later she’d add, “There is a particular belief on St. Maarten that only uneducated women, adults and children become victims of human trafficking, but the contrary is the truth. A lot of times I like to bring things home and sit down and think about the whole issue of human trafficking I realize anyone of us could become exposed and could become victims of human trafficking and the slavery that is associated with it. How is this possible you might ask? Any one of us at any given time can find ourself seeking new opportunities, a better finanicial position, a better future, a better career. Think about our children here and those studying and those going to study. It only takes one contact with the wrong individual and everything can go wrong from there.”
Simmons also stressed that the “phenomenon” of lover boys has reached these shores and is growing.
“In this phenomenon you have young men especially targeting young ladies and also the other way around. They befriend, become their lovers and eventually they end up in prostitution. So this is a situation that can hit any of us at any time. So let’s not close our eyes to human trafficking and the work the Atip and IOM are doing. Let’s do our best so all of us can do our share in combating human trafficking,” Simmons said.
The workshop will conclude on Friday with the presentation of certificates.