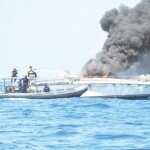 Power boat goes up in flames at sea

Precariously perched at the top of an inflatable dinghy, members of the Coast Guard direct jets of water into the burning boat. Milton Pieters Photo. St. Maarten / By Milton G Pieters - The main objective of the Coast Guard was to extinguish th

Prices have increased compared to December 2011 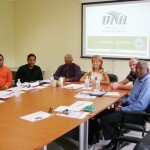 President of the University of St. Martin Annelies van den Assem (3rd from r), Acting Dean of Academics Glen Yeung (r) and Head of the Business Division Erwin Wolthuis (2nd from r) met with a delegation from the University of the Netherlands Anti 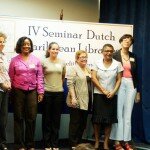 Director of the Philipsburg Jubilee Library and the first president of the newly formed Dutch Caribbean Library Association Monique Alberts (right) stands with the rest of the board shortly after they were elected. St. Maarten – Director of th

St. Maarten – Data released by the Department of Statistics on Tuesday shows that the 12-month average of consumer prices was 5.2 percent higher in February 2012 than in February 2011. This represents an increase in the inflation rate of 100 percen

Dear Mr. Editor, A gentleman mentions my name in an article in your paper. The article is name “The politics of fear and division.” This person was in the National Alliance. Where was he when his leader William Marlin went to Holland to look f 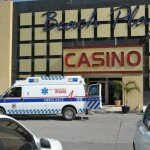 St. Maarten - A waitress at Beach Plaza Casino collapsed on Tuesday just after three in the afternoon but the quick action of ‘casino regulars’ may have saved the life of the woman who’s in her mid-thirties. The woman was identified as Anna R

St. Maarten – The two member Democratic Party faction and Independent Member of Parliament Patrick Illidge sent a joint request on Monday for a closed door meeting of parliament’s Central Committee that will focus on four issues related to the Ce 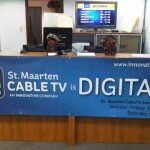 GREAT BAY —The St. Maarten Aids Foundation is concerned about the high prevalence of persons engaging in unprotected and highly risky sexual activities. Over 50 percent of the persons tested at Saturday’s Lions Club Health and Wellness Fair were

Editorial: Simple only for some

Is there a future for the Central Bank of Curacao and St. Maarten? That is a question that has a simple answer for some and a far more complicated answer for others. Very simply it is a means of getting rid of another vestige of the now defunct Nethe

Opinion: The merits of legalizing prostitution

Prostitution is a subject that invokes a lot of emotion, mostly because many people take a moral stance on the world’s oldest profession. On Tuesday we delved into how the population feels about the matter, especially considering the horrors that y