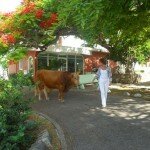 St. Maarten – Tamarind Hotel managing director Paul Ingram was touched by the picture that appeared on the front page of the Daily Herald on Saturday, showing a dying cow with a mourning fellow-cow next to it. He sent his hotel guests pictures of a

Timeshare-owner charged with $100,000 in maintenance fees

Copy of the invoice Arthur Macdonald received for his condo’s maintenance fees.Diamond Resorts sticks to new treatment of whole-owners at Royal Palm Beach Club St. Maarten / By Hilbert Haar – The battle between Arthur Macdonald and the Ro

St. Maarten – At least ten hotels and dance clubs in St. Maarten are facilitating prostitution, the Ipol crime analysis report states. “Usually the owners of these establishments have a permit for exotic dancers.” Next to these hotels and dance

St. Maarten - “Beyond alarming,” Finance Minister Hiro Shigemoto said about the Ipol-report Crime Analysis of St. Maarten that was released last week. The Minister said that he was yet to read the report in its entirety but opined that the magnit

By Rueben Thompson Much has been said over the past few years about the Emilio Wilson Estate. In recent months the estate has again become the center of controversy as an American company “Rain Forest Adventures” has submitted permit requests

The timeshare industry is booming, but the sector is surrounded by so much bad news that it is becoming a nuisance rather than a pillar of our tourism driven economy. Profits seems to be flowing into the coffers of companies that are not even on o

The Amigoe in Curacao gave a remarkable twist to the story about the delegation that left the Inter-Parliamentary Kingdom Consultation on Friday. Curacao left because it was unable to convince the other three delegations that it were just to include

St. Maarten – President of Parliament Arrindell has made structural arrangements to broadcast all public sessions live on radio via Pearl FM 98.1. Pearl is taking over from Radio Soualiga, following the retirement of its host Eddie Williams.

St. Maarten - Understaffing by more than 40% has forced the tax inspectorate to recruit professionals from the Netherlands. The head of the tax office, drs. Geert Bergsma, said that his department is working hard to bring more revenue for the St. Maa

SANDY GROUND – A fisherman found the body of a 38-year-old man in the Sandy Ground lagoon early on Saturday morning. It is unclear how the man, whose name was not released by the gendarmerie, died.

St. Maarten - After a premature end to the RBTT 50 over cricket tournament last December, the battle is set to resume next weekend with the A&A Supply Events taking on KFC Twisters on Saturday and Future Champs versus MNO Montego Bay the followin

St. Maarten – The Central Committee of Parliament meets tomorrow afternoon at two o’clock with the Board for Financial Supervision Cft. Parliamentarians will be introduced to the new board members. Prof. Dr. Age Bakker is the new Cft-chairman.

Cricket coach Singh calls on youngsters to get involved

St. Maarten - With the emphasis on developing the game of cricket at the grass roots level, National Cricket Coach Rishi Parsram Singh is once again extending an open invitation to young boys that are willing to get involved with the sport. Singh,