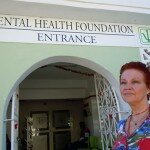 “Treat patients as long as possible in their own environment” St. Maarten / By Hilbert Haar – She had the option in 2005 to stay home on sick leave with full pay until her pension, but instead our Person of the Year chose to become involve

Editorial: Coming to the end

We are coming to the end of 2011 and people stand at the moment where they review what has been done in this year and where they are going in the next one. One thing we’d ask each of our readers to look at though is how much did you invest into t

We all know why good intentions are called good intentions: they have failure written all over them, but it feels good to say on the last day of December: “Next year I am going to lose weight, I won’t cheat on my wife anymore, I will stop drinkin

The Windward Islands chamber of Labor Unions announced yesterday that it will start with a rating system for employers next year. While the system’s exact details are not entirely clear yet, Wiclu president Theophilus Thompson said that it will sco

Rui Bagina is desperate and we honestly do not know what to do about his situation. Rui came to our office with a letter he wanted us to publish. After careful consideration we told him that its content was rather vague and that our readers would not

CPS urges public not to drink and drive over holiday weekend

St. Maarten – The Collective Prevention Services (CPS) and the Department of Communication (DCOMM) in a collective public service message is urging motorists not to “Drink and Drive,” during the up-coming holiday weekend. The emphasis is on kee 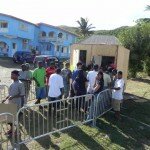 One of the smaller groups of people who went to purchase fireworks stand in line on day one of the sales. Most of the supply is now gone.Police and Prosecutor issue advisory St. Maarten – Firefly Family Fireworks’ supply of fireworks is ba

St. Maarten – The Pointe Blanche Inmates Association has called for Justice Minister to grant early release to prisoners under particular conditions including good behavior and proof of rehabilitation in order to solve the capacity issues at the Po 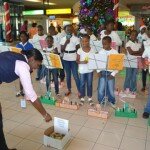 St. Maarten – Draft laws which have been discussed by parliament in a number of hearings during the past months are currently available on the parliament website. The website address is: www.sxmparliament.org The draft laws available for review

MARIGOT, St. Martin – Leader of the opposition in the Territorial Council Alain Richardson has said the general outlook for St. Martin remains grim and there is “no element that gives the indication that the economy has started to turn in a posit

St. Maarten – The Windward Islands Chamber of Labor Unions Wiclu will start rating employers next year on the way they treat their employees. “There are businesses that use good practices in terms of job security. We will expose those who do not,

The year of Jules James

St. Maarten / By Hilbert Haar – It has become a tradition at our newspaper not to bore our readers at the end of the year with pages upon pages about everything that happened in 2011. Instead, we look at the highs and the lows in politics, in crime