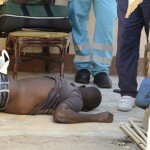 St. Maarten– Police were still busy identifying the country’s 17th murder victim for 2011 on Monday night. The man was shot dead close to 3:00 p.m. on Boxing Day (December 26) close to Ace on Well Road in Cole Bay. Both the Public Prosecutor

Unemployment on St. Martin double that of St. Maarten

CPS urges people to use less salt and sugar

St. Maarten – The Collective Prevention Service (CPS) of the Ministry of Public Health, Social Development and Labor has urged the public to commit to lowering their intake of sugar and salt in 2012. The urging is part of a statement they issued ov

WILLEMSTAD – Use the life of Jesus Christ as a living example. That is the central point in the 2011 Christmas message of Bishop Luis Secco. This year’s message is based on John chapter 1, verse 4. Secco believes Christmas is a celebra

St. Maarten – The Civil Registry has set aside seven days between January and February for approved BTA applicants who will be registering for the first time. All other people with BTA renewals will be given further information at a later date.

St. Maarten – Both the Police and Public Prosecutors Officer have confirmed the start of an internal investigation on the role of two newly installed officers in an altercation at Tantra Night Club. Neither was willing to issue a statement beyond t

It is the season to be jolly, as we celebrate salvation coming to the people on earth. We had many challenges throughout the year, as we are together building our young nation. Staying the course and maintaining planned schedules has not always be

Season’s Greetings to my fellow St. Maarteners and visitors, As a nation we are preparing to celebrate the feast of Christmas. Here in St. Maarten it is eagerly anticipated as a time for family gathering, religious services, and getting together

THE NETHERLANDS - Queen Beatrix drew attention to environmental issues in her annual Christmas message, expressing her concern for the future of planet Earth and the unequal distribution of the planet’s riches. “Selfishness and extravagance bl

Fellow St. Maarteners, The Christmas season is upon us once again and it’s a wonderful time of the year.  We can celebrate with loved ones, celebrate our faith at this special time of the year, and reflect upon our good fortune to live in the g

The Queens Christmas speech: A message to save Mother Earth

Her Majesty Queen Beatrix read her 32nd Christmas speech on Sunday – and this is one to remember. Before an audience of 1.4 million viewers in the Netherlands, the Queen made a stand for the environment and against greed. The inevitable Freedom Par

By Roeland Zwanikken* The remarks of Leroy De Weever (DP) raised quite some eyebrows, not in the last place within the legal community. In essence the MP states that MP’s don’t need a good or (sic!) ‘bad’ Corporate Governance Council to �

Editorial: Laying out the facts

The dated nature of the figures laid aside, the new report by the French Information Desk on Overseas Territories reveals how one side of this island – despite its struggles – continues to feed the other. Yes the French Side continues to some ext

Citizens and Friends of St. Maarten, Warm Season Greetings to all, It’s the time of year where one looks forward to enjoy the company of friends and loved ones, and to share in the traditional joys of the Holiday Season. It’s also an occasi