St. Maarten – Director of Bureau Telecommunications and Post St. Maarten Peggy Ann Brandon confirmed recently that the regulator is giving telephone companies indirect relief on the fees they pay. The relief stems from the fact that the companies t 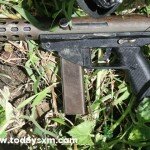 St. Maarten – Police found a 9-milimeter caliber Luger handgun in Cay Hill recently. The discovery was made by the Zero Tolerance because of a tip the police received. The gun was under a black bag with food in it. The weapon was loaded with 9

Every democracy gives its citizens an opportunity every so often to elect a group of people from among them to lead the nation. In our dualistic system the direct representation is provided by Parliament and Ministers daily seek out the best policies

Letter: The St. Maarten people are more important than the song

Parliamentarian George Pantophlet has brought up an old question to which everybody knows the answer. At least, everybody could know the answer, but apparently, MP Pantophlet does not, or he has forgotten all about it. In Tuesday’s central committe

Opinion: Souls for the Kingdom

We’ve been wondering for quite some time now, without getting around to putting some real energy into it, what is going on with the tent-church in Dutch Quarter. The blue and white striped House of God appeared sometime during the summer, complete

St. Maarten – The Philipsburg Jubliee Library launched its revamped website - http://www.stmaartenlibrary.org/ - and was presented with DVDs with the first five years of Profiles of the Windward Islands on Thursday afternoon. The presentation of th

St. Maarten – Due to a number of recent waterborne accidents, Government has introduced additional temporary safety measures according to the Water Sports Ordinance, AB 1978 nr. 13. The Ordinance applies to all water sport activities, in the broade

Meyers welcomes news that US travellers to increase vacation spending

St. Maarten – Minister of Tourism, Economic Affairs, Transport & Telecommunications Franklin Meyers, says it is welcome news that US travellers are expected to increase vacation spending in 2011/2012. The news comes from the latest American Express

St. Maarten – Individuals or companies desirous of exporting wooden pallets from St. Maarten to other countries, must notify the Inspection Department TEZVT-LVV (Agriculture, Livestock and Fisheries) that falls under the Ministry of Tourism, Econom

St. Maarten – Finance Minister Hiro Shigemoto met C. Pompier and J. Chiyadi on Thursday. Both are St. Maarten students who will be completing their studies in the Netherlands in 2012 and 2013 respectively. They both plan to return and work in the M

St. Maarten – Chairman of the Supervisory Board of the Telem Group of Companies Rafael Boasman has expressed the board’s pride with the company’s rollout of its 3G+ network. The official launch was done on October 21 at Holland House. The inv

St. Maarten - Slowly but surely a picture starts to emerge of the gangsters that are involved in the local cocaine trade. Yesterday morning Andre Fernando D., a 62-year-old pensioner stood trial for his involvement in an attempt to smuggle 10.3 kilos

St. Maarten – The public prosecutor demanded a 6-year prison sentence against 54-year-old St. Maartener Roberto Bernard F. as the supplier of 10.3 kilos of cocaine and the organizer of a transport of these drugs to St. Croix in the US Virgin Island