St. Maarten – The Council of Ministers have gotten a lesson in how far they can go when it comes to issuing a Ministerial Decree. They’re learning from an error made specifically by Minister of Economic Affairs, Tourism, Transport & Telecommuni

St. Maarten – The Public Prosecutor’s Office in St. Maarten dismissed a record 36.9 percent of the criminal cases it registered last year. Out of 1,079 cases, the office dropped 397, 66 more than it dismissed in 2008. In 2007 the number of droppe

St. Maarten - The Court in First Instance sentenced Curacaolenean Urvin Ignatius Pieternella yesterday to 3 years imprisonment for setting up a drug deal involving 27 kilos of cocaine. With the sentence a drugs case dating back more than four years 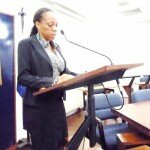 St. Maarten - Minister of Education, Culture, Youth & Sport Rhoda Arrindell says her and the Acting Secretary General have been able to cut at least 50 percent of the Ministry’s budget. The cutting was done in a “point for point and post for po